To a Talkeetna Breakfast

An early morning found us gathering in the lobby for our bus ride to breakfast. We had been joined at some point last evening by another group that had been at the Willow re-start yesterday. They were now headed back north, first to Fairbanks and then on to a point up the haul road just inside the Arctic Circle—just so they could “officially” say they had been inside the Circle. I had my ticket stamped last in the spring of 1974 when the Old Man, LTC Peter Burbules, and I took a flight to Fort Yukon to check out an operation that my petroleum officer, 2LT Ted Kuchta, was running in support of spring flood relief and medical help to the remote villages along the Yukon River. Another Bucket List item I had previously met!

I quickly located and took a chance with Matt, the resort manager, trying one more at getting a permanent gig at the resort. He wasn’t yet convinced that I was worthy of hiring to entertain the resort guests but I think he’s softening. He didn’t come straight out and say no. His response was that as long as I stuck to stories that were 70 & 80% true, he might be OK with a deal.” He kinda mentioned a doorman gig, but that's on the wrong side of the lodge to be able to see the Mountain! I guess that I’ll have to follow-up with him after I arrive back home.

On the bus, we were soon on our way to beautiful downtown Talkeetna for breakfast. Our destination this morning is to be the Talkeetna Roadhouse—the same one I mentioned in our last correspondence.

Because of the busy and narrow Main Street, we parked just down from the Roadhouse and walked to the entrance. We were ushered inside through one dining room, around the bend into the large dining room on the far west side of the building. There they seated us at a long table and announced that we would be served family style. The last thing our hostess mentioned prior to leaving the table: “Eggs are our specialty. You can have them anyway you want them, but they always come scrambled.” The announcement received the usual amount of laughter it was intended to illicit and she promptly left us to talk amongst ourselves. 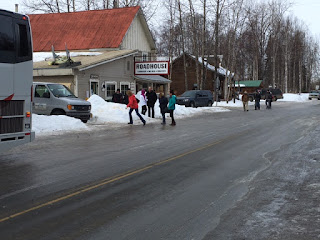 I hadn’t been here since late spring back in 1972 when my mentor (and Company Commander) CPT Denny Minter had traveled here to scout terrain for a refuel spot to conduct the first Arctic environment test on 10,000 gallon fabric tanks. Denny was not just my mentor and commander at the time; he was also my regular handball partner. The officers in our unit played a great deal of handball, especially during the winter months when all the other intramural activities had shut down. To make the teams even, Denny had to play with me; the two other Transportation Corps lieutenants felt their superiority and having Denny on my team, they thought I would be hampered somewhat. Oh, Denny and I managed to lose a game here and there every once in a while; BUT, we never lost a match—I was pretty good at the time and their effort could not match ours—no brag, just fact!

Denny and I had spent time driving all over the area that day in 1972 and had finally decided on an area located close to the flight line at the Talkeetna Airport. The Talkeetna test never took place. A closer sight to Fort Rich was subsequently selected. But Denny and I took lunch (sandwiches and soup) at the Talkeetna Roadhouse that day.

This morning, I had a good view of the window in the front room below which Denny and I had lunch. I hoped the chow was as good now as it was then.

Our host Trisha (owner) gave us a rundown of the history of the roadhouse from 1914 through today. While she briefed us, our breakfast began to arrive: eggs, caribou sausage, bacon, potatoes and all the fixin's. Trisha’s talk was more than entertaining. BTW, the food was just as good as ever! 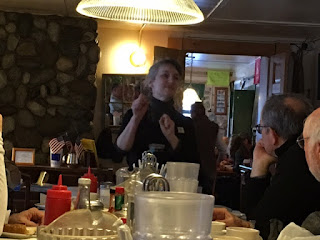 Trisha Costello (owner) and operator of The Talkeetna Roadhouse

After breakfast, we walked around the town is small groups. A gang of us visited the Ranger Post and watched a film on the Denali Operations and the need to maintain control of those attempting to climb the Mountain during the climbing season. Very interesting.

On our way back to the bus, five of us happened onto the Wildflower Café, sorta halfway between the Roadhouse and Nagley’s General Store. The place was for sale. We decided to purchase the Wildflower and plan to open it just as soon as we can all get back to Talkeetna; probably early Spring (Alaska Spring, that is). I hope I still remember their names when I get there. 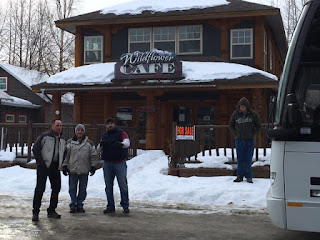 With the bus loaded, we headed back toward Anchorage and ultimately the airport. We were regaled with more of the same stories we had heard all week about the different sites we were passing, local customs and strange adventures and accidents all the way back into town. We dropped most of the travelers at the hotel. Joseph and I decided to remain on the bus; Bill and Trenton promised a guided tour on the way to the airport. Why not; we’d just be sitting around the hotel otherwise.

At the airport, Joseph and I then decided that we should go ahead and get off and check into the process. We were just a couple of hours from coming back and doing that anyway.

With that decision we started the process of going home from our Alaskan adventure.