Are you fed up with the Texas GOP?

Well, are you? I sure am. I can’t find any real leadership there anywhere; unless it comes from some of the lesser know guys serving somewhere in a dark corner.

It just seems to me that there isn’t any great thinking going on at all. If it’s an idea proposed by the Dems; it ain’t gonna get anywhere with the GOP—the conversely seems to be true about the Democrats also.

So where do the you & I stand in all this? Left out in the cold is where.

Both sides seem to pick legislation that is sure to be challenged by the other.

The State GOP leaders pick legislation that isn’t needed just because they have a perception of growly bears somewhere or think this is what’s gonna garner them some votes down the line.

Take the Voter ID bill recently passed by the Texas Legislature. There was NEVER any proof that voter fraud existed on any scale that required more control at the polls—none whatsoever. But the State GOP spent much of the past two legislature sessions drumming up support and hysteria on the effort to make voting safer from fraud.

At any level, there was zero doubt that this new law was not gonna draw the ire of the DC crowd. Texas is already under scrutiny from the old days (1965 Voting Rights Act) and any legislation in this area gets automatic review and must be approved by the Feds. Did anybody not think this was gonna be easy?

The State District maps drawn up by the GOP in the last session are still under scrutiny by the courts and there looks to be no doubt that they will be thrown out and the spring elections also thrown into a tizzy.

At the national level, the GOP led House sent a bill to the Senate to stave off the raise in payroll taxes and prevent a government shutdown with a provision for the Keystone Pipeline slipped in at the last minute—an obvious provocation of the President.

Just where is the leadership, I ask you; where?

Posted by John Howard at 5:28 PM No comments:

Did you have heroes as a kid? I did. There were many of them. I considered myself fortunate to have heroes. Sometimes, hero worship could be the best part of the day. Strap that six-gun on your hip, grab a brother or a neighbor and go outside and take up where you left off the day before with Roy Rogers or Gene Autry—could there be anything better? Having the chance to meet your heroes was even better. I actually had that opportunity early in life. The custom in the days of my youth was for the cowboy stars of TV and movies to perform at rodeos. At the end of their act, they would ride around the arena apron and shake hands with the throng lined up for the chance.

In the early winter of 1954 at the Cow Palace in Denver, CO, I shook the hand of Gene Autry—I didn’t think it could get any better than that. Then some three or four years later, I again had a similar chance and managed to shake the hands of Roy Rogers and Dale Evens at the Houston Fat Stock Show Rodeo—my life could have ended that day and it would have been complete; at least I thought so at the time. I guess that my one failure in this area is that I never had the chance to shake the hand of Matt Dilon from Gunsmoke fame. Matt was not initially a hero but his impact wore on me as time moved on and finally won me over.

Heroes are very subjective beings. They often come and go throughout our lives. Our desires and interests change or we move on to the next phase of our lives. It was after the second summer that I spent roomin’ with Dutch that I finally got around to figuring out just who were my real heroes. I remembered back: that guy that took me to work with him in the fields of Colorado, Montana and later Texas; that guy that managed to have Santa leave my first bicycle in Colorado the Christmas of 1953 and spent time helping me learn to ride over the next several weeks it in the ice, slush and snow; that guy who played pitch and catch in the yard in front of our trailer house when it came time to join me up for Little League (he also spent every game in the stands watching me play when he was in town); that guy that would knock off work early some afternoons when I tagged along with the crew just so we all could try our luck in a farmer’s pond or stock tank; and that guy that bought me my first shotgun and insured that I knew the rules and found me a place or two to see that I did. That’s the guy that later turned out to be my real hero—I had figured out that the TV and movies were just play-like as he used to remind me. 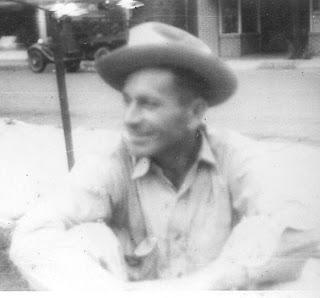 I bet you had heroes also. Who were yours?

Posted by John Howard at 2:29 PM No comments: