After the Reindeer Run, we returned to the hotel (Captain Cook) and rested a bit before heading out to dinner. Joseph and I decided to head back over to the Glacier Brew House since it was close and we really hadn’t given it a good try. Remember, the first night in town we ate here about 0100 hours in the morning (Texas Time) after having started our day at 0530 that morning.

The place was packed, Saturday night crowd. We asked if we could try to get a seat at the Bar and were told to go ahead. Moving around the room, we ran into Dinna, the lady from Dayton, Ohio we had met on the Dog Yard trip earlier in the week. She and her party were about to de-table and depart. She pushed us up to the high table and in front of a couple of guys that were obviously waiting in line for the exact table Dinna pushed us toward (I’m not kidding you here!). As the table cleared and Dinna departed, I turned to the guys who had been standing there and ask if they were waiting for those chairs. They responded that that was correct; and fortunately there were only two of them, there was two of us, and there were four places now available—it all worked out.

More of Dinna’s group joined us to our right at about this same time. The wife was a retired School Principal and the husband was a Sales Tech working for a company that made Spiro drives.

We all struck up a great friendship instantly as we had many tales and adventures to share with one another. A contest of “that’s pretty good, but consider this” took the rest of the evening to work its way out. I’m here to state that Joseph and I held our own and most likely won the evening’s tall tale contest.

After finishing the dinner and the evening, Joseph and I went back to the Captain Cook to pack for tomorrow morning’s drive to the Race Restart in Willow and relocation to the Talkeetna area for our last overnight in Alaska.

0700 hours, and we were downstairs for breakfast—the Salmon Omelet. Most of our group were in the restaurant also; all of us separate tables. This is the way the entire trip had evolved. After breakfast, we were together for most of the days and then separately for dinners in the evening. But today would be different.

Wasilla and the Race Headquarters

Our first stop up the highway was in Wasilla at the Iditarod Headquarters. Before I go there, I want you to know that I checked; you cannot see Russia from here! One of my High School friends, Russell Autrey, advised me that I should “Borrow Sarah Palin's glasses, cause we all know she don't tell no lies!” I looked for her, but didn’t see her anywhere around. The headquarters is an interesting place; with all its history and education on sled dogs, in general; it’s well worth taking time to give it a look over. 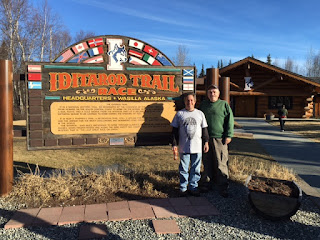 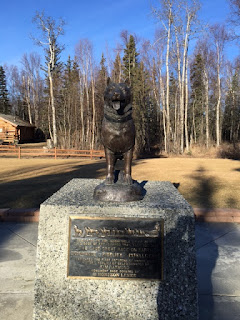 Statue dedicated to the Sled Dog 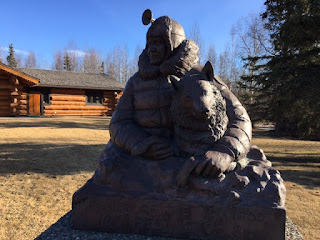 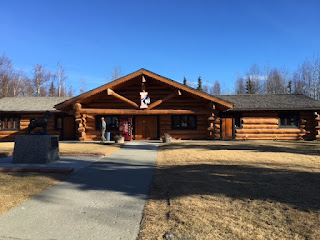 After our headquarters tour, our Driver Bill took us straight over to the local Fred Meyers (the Alaskan version of HEB, Safeway or Tom Thumb) so we could buy ourselves a sack lunch to take to the re-start in Willow. I found an Italian Sub packaged in a display right up front, gathered a bottle of water and a bag of potato chips and I was ready to go. Others took significantly longer to acquire a gourmet meal for their consumption.

Back on our way, we were heading to our main trip destination—the actual start of the Iditarod—The Last Great Race! Now the excitement was rampant. Before you could count the number of booties required to outfit a sled dog team, we were at our destination and the bus was parking. A short walk later and our feet were on the biggest ice cube in the area—the frozen surface of Willow Lake, the re-start line. I reminded Joseph of the time we had come here in 1971 for the car and motorcycle races and how amazed we were at the time that we were on a frozen lake along with hundreds of cars and thousands of people—standing around with not one thing to worry about. We walked some of the dog trailers and then went to find us a great vantage point up the shoot. 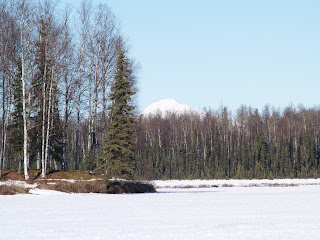 Willow Lake (with Denali above in the distance) 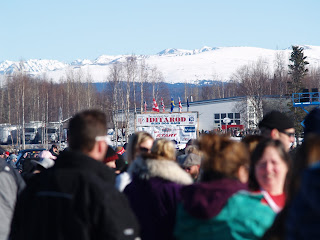 Start Line below the banner. 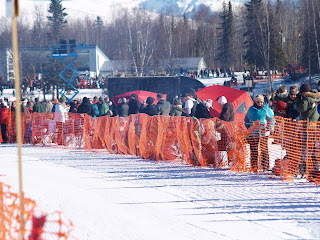 Race Fans taking up positions along the shoot 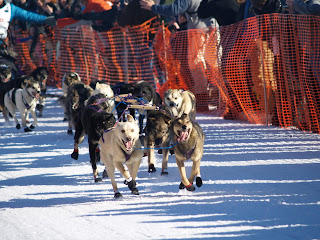 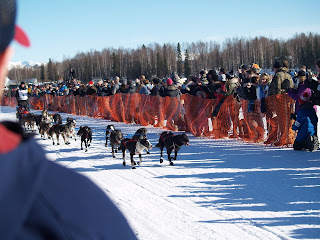 Dallas Seavey’s Team reaches our position along the shoot 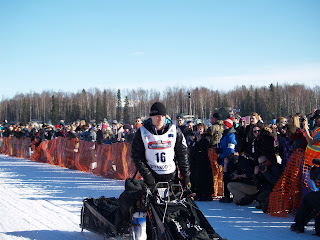 Dallas Seavey—finally on his way to Nome!

The Race is on!

We watched the start and saw at least those we really wanted to see get off and on their way to Nome: Aliy Zirkle, Mitch Seavey, Dallas Seavey, Jesse Royer, Robert Sorlie, Cim Smyth, Scott Janssen, and Allen Moore. Man!! What a thrill to see this again after so many years (1973 & 1974)? They passed by every two minutes (a time difference that is made up at their 24 hour layover.

While standing there, I met and talked with a nice young family that was originally from Sandy Point, Alaska. That’s a 7 square mile island just east of Dutch Harbor, out on the Aleutian Chain. I didn’t write down his name (I’m sorry!) as I promised him I would send him a free copy of my just recently published book if he would send me an email (I gave him my book card so he would have my address—I have yet to receive the email; I hope he sends it along soon. His wife had insisted that he move the family to the Anchorage area for their daughter’s education opportunities. He’s an architectural production schedule and seems to be doing very well for someone that grew up fishing the “deadliest catch”. I really enjoyed the time we spent watching the re-start.

We soon had to depart so we would not be the group that everybody on the bus was waiting on so we could make our way to the Talkeetna Lodge, our destination for the evening.