Laying here jaybird naked after having finally arrived back home from a night out with the girls—as Patsy calls my monthly trip to dinner with my high school classmates—and having moved the leftover Popeye’s Chicken box outta the way for room, I’ve stuffed the purple hulls that I had retrieved from the Farm Patch in Bryan into the fridge to be bagged up first thing in the morning. I bet ya haven’t been able to get that jaybird reference out of your mind yet, have you? Well, the excitement of getting home and taking the pups out back one last time before ascending the stairs to end an eventful evening had caused the heart rate to elevate just a bit—I needed to cool down prior to stacking some zzzzs. 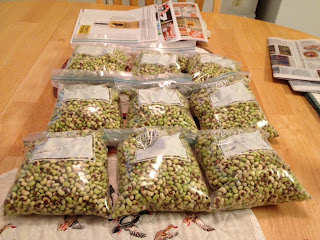 Purple Hulls from the Farm Patch


I couldn’t start the zzzzs until I had reviewed the evening:

Foremost in my mind was the trip home. While listening (read struggling to stay interested) to Jimmy’s fifth time through the guys in his unit procuring an replacement night scope so they could turn in a tank somewhere in Germany, Jersey or maybe Ft Hood or maybe it was the daughter in California requirements; I had been hemmed into the center lane approaching some night road work between Bastrop and Austin. As I slowed down to fall in behind him, he slowed also. As I speeded up, he again did also. Finally punching it and charging ahead in an attempt to gain the advantage, my truck hit 90 quickly. Hoping that I didn’t cut him off too sharply—his horn indicating that I might have—I commented to Jimmy: “I never knew those highway cones could fly so high! Well at least the road crew has the rest of the night to get them back in place.”

Thinking back to the dinner with the girls; I had ordered (again the last in line to do so; last to be served the previous month) a chicken fried steak as it seemed to be the safest only to have it wake me up during the night—I think the last chunk of chicken fried trying to exit back the way it have entered. Hagar the Horrible never had a case of indigestion this bad! Tossing and turning, I hoped I had dozed for three or four hours and hoped that it hadn’t been just an hour or so. I definitely didn’t want to spend the next seven hours suffering like this.

Everything kept running through my brain.

I know Thomas and I discussed the entire past season of “Duck Dynasty” and all the characters highs and lows. Then we moved on to the coming season and each of our hopes for that.

Tonight, I got my entrée just about the time everybody else did. I gazed down at a chicken fry that roughly looked the size of a miss-sharpened home plate and thought I hit the jackpot. Little did I know that it would return to haunt me later. Then there was that stack of mashed potatoes leveling off about chest-hair high and a good little bowl of corn. I had entered redneck heaven.

At some point, I made sure I had everybody’s attention in order to make some witty comment in response to an utterance from across the table about how thoughtful the restaurant was to have put Thomas’ snow peas in a separate bowl so the juice didn’t mix with his chicken fry—by the way: snow peas! How does that come about? I had just dumped my corn (and its juices) into that stack of taters and said: “Vicky! Wasn’t it nice that the restaurant did the same for me?”

Well Vicky took exception to the comment. First by insuring that her name was Kay and not Vicky and then affirming my comment to be right on target. There I was; right back in high school and embarrassed by something I had done that was outta line; stripped completely of all my dignity. Me face should have turned red but couldn’t. All the blood had just flushed completely like Universal Rundle had taken over all bodily fluids. I looked to see if I could crawl under the table but our positioning was so tight I stood not a chance. I had to sit there and take it as if nothing had changed in forty plus years. I apologized to Kay—I have no idea why I called her Vicky, she wasn’t even there.

Eventually the conversation passed on to another subject and I began to feel better about my situation.

Sam took us off on a tangent and assigned us all homework to watch some TV movie coming up over the next couple of weeks having to do with four guys (2 black and 2 white) that had been chained to the floor by Barry Gordy and made to suffer awful punishment somewhere in Detroit for year after year. I’ll look for it, but don’t think it can compare to the Cleveland stuff currently playing out.

We got into a rousing conversation about ancestral searches and who had made what discoveries and who had had problems getting to information. Some of the cemetery searching that some of the girls had been up to sounded sorta creepy—had enough of that kind of play growing and don’t want to go there again.

Still not able to shake the chicken fry attack, I turned to thinking about gathering a crew somewhat earlier the coming afternoon and hitting one of the Austin eateries, say around 4:30 PM (My son sings to me about eating at 4:40 PM to the tune of the Village People’s YMCA all the while thinking he’s getting over on me. I’ll take the harassment over the indigestion at any time.) With the Legislature not due back until Monday, I don’t know where I’ll be able to come up with a class of clowns. Don’t worry, I’ll scrape together some from somewhere. Still thinking about that jaybird?