Woodpeckers are back in the park


Woodpeckers are showing up in the park almost daily now. It’s a real treat to hear these guys and then track them down as the navigate their way from tree to tree to pole. 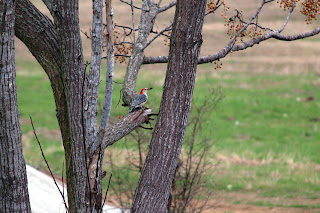 .Their call is so distinctive that there is no guessing who it is that’s trying to get your attention. Finding them after the call is the real challenge. But this week, this task hasn’t been much of a challenge. My challenge has been to remember to take my camera with me. The cell phone just isn’t sufficient. 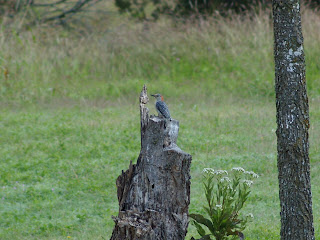 Once found, my second challenge is getting Little Gus and Otis to stand still enough and long enough for me to get a decent shot. 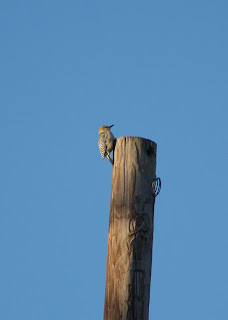 With the numbers I am seeing, I am almost assured of a fairly good pix even if I miss the first 10 or 12. 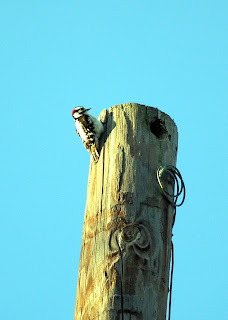 Don’t forget Toby, the number one squirrel in Texas. He’s got his eyes on something! 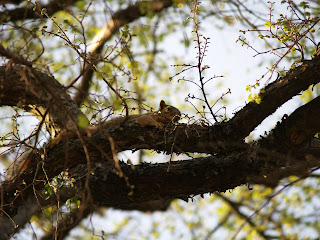 Posted by John Howard at 1:31 PM No comments:


This past Sunday morning my wife, Patsy, fixed a special breakfast. Actually every breakfast Patsy fixes is special—that woman can cook.

First off, she put the bacon on to fry. Not just any bacon; Peppered Bacon;. While just about any bacon will do—maybe not that maple flavored bacon, but just about any other bacon is OK. I am satisfied with any form of pork fat: ham, bacon or sausage is just fine. But today it was bacon.

While frying the bacon, she pulled some red potatoes out of the fridge and started in on them. Cleaning them up, she had them down to hash brown size in no time at all. Have I told you just how much I like red potatoes? They are the gold standard of potatoes. No potato can match the potato sweet taste of red potatoes, none, nada, zero, zilch! Get the point?

The potatoes are now on the stove-top in their own bacon grease and cooking away.

The bacon finishes, some of the grease is pored off, the bacon is set aside to dry and the eggs are headed for the skillet. Patsy knows just how I like my eggs. Oh ya! One over medium and one a little runny. I never seem to get them this way, but yet, I still get two eggs and they are good enough when they get to the table.

Well, from where I stand there is no complaining. I’ve never seen a GI miss morning chow unless he/she was tired to their rack or confined existing solely on bread and water—they will not miss morning chow.

Let me guide you through a visit to a military mess hall from the days that I served.

Entering the room, tent, shade tree—regardless of where it exists, one must sign, show their meal card, or whatever—some proof that you are authorized to subsist at that facility is required. This is not just a regulation, this is law. Congress funds military messing operations and without authorization, you don’t eat. I get into this further in a little while.

Once you have signed in, one heads directly for the chow line. Oh no, you don’t hold back, find a reason to dilly-dally; the aroma will not allow you that privilege.

Using your Army provided mess kit or a tray if you’re lucky enough to be in a garrison facility you start loading up on the fresh fruit. There’s some portion control involved but since everybody has different tastes, the cooks don’t pay much attention unless your tray looks to have the same capacity as a dump truck.

The egg cook is most likely trying to get your attention at this time. His function is to keep the line moving and have your eggs ready when you get to his station. Oh, he keeps pretty good track of who gets what. He does this over and over, day after day, year after year. A good egg cook is treasured by the mess steward, let me tell you.

Full of fruit and your eggs ordered, you turn your attention to the hot cakes, butter and syrup. If you can manage the space, drag yourself out a stack and lather them up.

One of the first items to add to your tray is the potatoes. Yes potatoes. One of the reasons I stayed in the Army as long as I did is because there were potatoes at every meal. Not just once or twice a day, but all three. Midnight snack, if the situation arose just as likely had some potatoes on the side also. Potatoes and more potatoes—bring ‘em on!

Proceeding on now, we try our best to get away with taking three or four slices of bacon, a slice of ham or two and finally three or four sausages. If any of the following is under strict control, go for the sausage. I guarantee you the sausage will be the best—never did I have a bad sausage patty my entire military career.

You have finally made your way to that egg cook I mentioned earlier. Right there he is with just what you ordered—one over medium and one just the slightest bit runny. Boy howdy—can you beat it?

If you still have room on your tray//mess kit, drag a piece or two of toast onto it and cover it with SOS. Yah SOS—that same ole’ shit—an Army staple for several hundred years and it has to be there every morning. No SOS and the troops would really complain!

Because your try//kit is so loaded now, go sit it down and return to the beverage area. Draw off a container of orange juice, two containers of milk and don’t forget a cup of coffee. Return to your consumption area and dig in. You now have sufficient sustenance to make it all the way to lunch.

During most of the time I was serving, the officers drew $47.88 a month. This rate was established during the Big One, WWII, and didn’t change to the mid to late 70s. Try to get by for a full month on $47.88 meal allowance—I dare you!

So when I was signing into the mess facility as an officer and forking over my 25¢ for the breakfast meal, it really ate my sole to have to fork over another dime for the officer’s surcharge. Another 10¢, can you imagine?
Posted by John Howard at 5:17 PM No comments: