I’m not sure exactly where I stand on this illegal deportation hold executive order released by the current administration in D.C. The strict conservative in me says: ”Hold up there; is this right?” The kind hearted soul that I am says: “They didn’t cause this mess; cut them some slack!”

But here’s the rub.

The other day there was a report in the New York Times stating that “More than 82,000 illegal immigrants have applied for a two-year reprieve from deportation in the first 30 working days of an Obama administration program, and 29 (thousand) have been approved, officials from the Department of Homeland Security said on Friday.” http://www.nytimes.com/2012/09/15/us/us-cites-fast-pace-on-reprieves-for-young-illegal-immigrants.html?_r=1

That’s a little over 35% claim clearing efficiency. Additionally “63,000 applicants had already been scheduled to have fingerprints and photographs taken for a criminal background check, the second step in the process.”

What’s more, “Officials had originally predicted it could take several months after they began receiving applications on Aug. 15 for the first immigrants to be approved.

Only several months to get these claims cleared? Just where did this efficiency come from?

On the other hand, I find this report from the same New York Times: http://www.nytimes.com/2009/07/13/us/13backlog.html?pagewanted=all&_moc.semityn.www

“the vast majority of the 82,000 claims the department received each month were not from veterans returning from the current wars. “We’re still getting a lot of Vietnam vets,”

But the stated VA Goal is “is to process all disability claims within 125 days, at a 98 percent accuracy level, and eliminate the claims backlog in 2015” and “All 56 VBA regional offices will be operating under the new organizational model by the end of 2013”

Then there’s the report in USA Today http://www.usatoday.com/news/military/story/2012-07-17/veterans-disability-claims-backlog/56282042/1 that states:

Now I ask you; just where is the disconnect between the Current Administration’s handling of these two important topics? Is one more important than the other? Regardless of how you sympathize with the immigration issue; don’t we owe some priority to those who have fought and served us in the past as well as being ready to support those currently serving and fighting for us currently?

It seems that the current administration feels that helping the illegal issue is more important than providing for our Vets—sure seems that way to me.

Extrapolating the same claim efficiency rate to the number of backlogged Veteran cases, the VA could clear some 304,500 claims in the same period. That’s more than 300 thousand vets better off by the turn of the year—not sometime in 2015.

How ‘bout we put the effort where it’s deserved or as a minimum get these claims people working one Vet case for every one immigrant case? Fair is fair!
Posted by John Howard at 3:20 PM No comments: 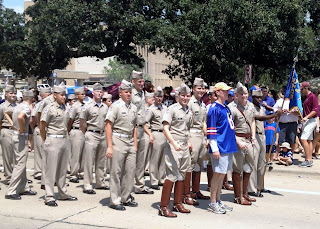 Jeff did a very good job explaining the culture from the outside—better than most that try to attempt it. Good job Jeff
Posted by John Howard at 4:37 PM No comments: