As scheduled and predetermined, the Executive Committee meetings of the Austin branch of the Stephen F. Austin Class of 65 held their by-whatever meeting yesterday at the Aplebees on the corner of Ben White Drive and MOPAC Blvd.

Those in attendance were the following: Jimmy Phipps, Jerry Nance, and our new member (under consideration) Ernie Lee.

To begin the discussion, a toast was proposed and drank (Big ole Iced Teas all around) to our recently departed Charter member, Bobby Buntyn. Bobby is greatly missed. His council was always positive and truly respected.

Here’s to you, Bobby! 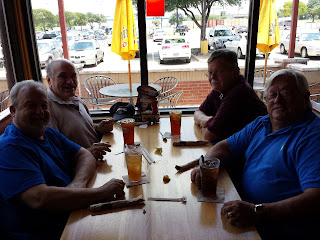 Although, not totally unexpected, a large part of the discussion was held at my house by the early arrivers (always); the biggest part detailing the Texas open carry decision and the Governor’s recent decision to arm the National Guard facilities in light of the Chattanooga incident. Pros and cons exist on both sides of the argument and just how this order will be carried out. The number of guns present downstairs was no way near those present upstairs. Be that as it may, the heat didn’t rise above a simmer.

I will state that Little Gus and Otis welcomed their old friend Jimmy with much more exuberance than either of the other two attendees. They like his Boxer, Bella, actually more than they like Jimmy, but that’s to be expected.

Once we arrived at Applebees, were seated and saluted Bobby, we jumped into the meal ordering. I know you can tell from the picture that there haven’t been many meals missed by this group. Ernie started his order off with a TRIPLE Bacon Burger and chips—see how he worked those slimming chips into the day.

The remaining three of us chose one of the new menu choices: the TRIPLE HOG Burger (that’s Bacon, Ham and a nice serving of Pulled-Pork BBQ)—we didn’t hold back and settle for the chips though—we went whole hog and got the French FRIED potatoes of one kind or another—no willie-nillies in this part of the group. All things considered, Ernie may have jeopardized his chances of full membership by taking those chips—just saying!

Somehow Ernie, without the benefit of knowledge of the established agenda, got us off on a discussion of the carrier Kitty Hawk, the Constellation (Jerry’s Boat) and the riots carried out on them during the VietNam skirmish. After Jerry had taken the opportunity to tell fifteen or twenty war stories, we finally got back on agenda. Have I mentioned before that we need to take a binding vote on whether Jerry is an official member of the Class of ’65. Somehow the previous votes have not held him back from barging in on our frivolity—that’s just wrong somehow.

If you cogitate on the situation for just the slightest, Jerry hardly makes a good runner and his abilities as a gopher are barely passable.

At some point around this time, Jerry sidetracked the discussion and stated he was looking forward to a Trump-Cruz ticket for the Republican Party. Not wanting to get too political we determined that it was not in the Committee’s interest to issue a Trump-Cruz endorsement—the issue was tabled for later consideration.

About this time, the chow showed up and the meeting took on a quieter tone for some five or six minutes—just long enough for Jerry to get BBQ sauce all over his polo.

While Ernie followed my lead and tried NOT to war story the others to death; with both Jimmy and Jerry, it’s a no win situation. Now, I’ve heard ALL of Jimmy’s multiple times and most of Jerry’s several times, none of us had heard any of Ernie’s in the last fifty years—he’s been lost that long. I will say that I enjoyed the Houston induction center desertion story the best of the few Ernie told—was that James Fridel who was the black hat there Ernie?

As a result of their showing today: Jimmy Phipps has been elevated to full membership on the Executive Committee and Ernie Lee has been awarded junior membership—he’ll have to attend a significant number of more meetings. And, if you are still wondering, Jerry Nance’s status was again tabled for later consideration.

Before you know it, lunch was over and we were back at the house standing there passing around Jerry’s new concealable .357 revolver. As a side note, I will acknowledge that as the last looker prior to returning the pistol to Jerry, I willingly passed up the opportunity to shoot any and all of the other three.
Posted by John Howard at 3:24 PM No comments:

Just this very morning, the valiant members of my cul-d-sac militia beat back a probing action from the troops involved in the Department of Defense exercise Jade Helm 15. They did themselves and their cul-d-sac nation proud. Every attempt at crossing our most southerly and easterly fence line was repulsed with great vigor.

The aggressors had rolled into the area from the fringe of Bastrop extremely early for our mostly retired defenders; probably close to 0930 or 1000 hours. Most of us still hadn’t had our morning oatmeal and raisins yet. But we were ready soon as the neighborhood dogs let us know we had unfriendlies in the area. Our night cats had patrolled almost all the way to Bastrop the previous evening and had advised of the massing of troops and equipment along our eastern periphery. At the midnight strategic planning meeting, our sole non-sixtygenarrian was advised of the threat. He wisely decided to alert the rest of us the next morning foregoing the ultra-late night wake-up of sleepy heads—most of us greatly appreciated his foresight or we would have been worthless defending the ramparts this morning.

As we assembled this morning, the initial question was whether Governor Abbott was going to send troops to help us defend our cul-d-sac. Nobody had an answer, so we all checked our cells and found we needed recharging to a man. Our sole just-turned-sixty member of the defense team questioned the need to draw a line is the asphalt. We decided to table the question until we had determined the amount of effort this would drain from our barely-able-to strength levels and revisit the question at a later planning session.

Well, just as soon as we heard the Humvees heading our way, we were on guard and hanging over our privacy fences, ready for action. Every AR-15 we could get our hands on was pointed east with thirty plus round mags in place and skads of loaded mags on the ready—they weren’t coming into our base of operations without a fight.

Through our binocs, we couldn’t see a bright orange armband in the bunch. We right away knew we had been duped by the sideways propergander spewed forth by the establishment and the liberal media. Still, we had some reason to deliberate over whether these were the good guys or the bad guys—maybe Governor Abbott had sent them. What if these guys were the Governor’s observers? We sure didn’t want the state house coming for us cause we attacked the National Guard. We held up for just the slightest ‘till we could get a better read on the situation. That’s when we finally had a couple of bars on my neighbor’s cell and called Greg’s operation center at Camp Mabry. They verified they had no troops in our area.

One of the guys ask: “What if it’s those guys from the International Society of Bridge Spitters? It might be Mr. Eric Johnston and his “neighborhood watch.” What then?” We cogitated for a moment or two and decided these guys were on their own; we had no way to contact them and besides, they weren’t flying a white flag or anything that would ID them as bridge Spitters. We cut loose with our AR-15s and gave ‘em hell-to-pay! We fought tooth and nail for what seemed like hours and hours.


There’ll be no martial law in our cul-d-sac!

Before long, they were pulling back and their attempt to overrun our cul-de-sac had been immediately repulsed. We drew a sigh of relief and adjourned to the first neighborhood house for a big ‘ole glass of Iced Tea! After all, it was closing on noon and lunch was soon the topic of discussion. I hope the Warden has somethin’ other than oatmeal on the menu!

Our tongues are in our cheeks.
Posted by John Howard at 3:00 PM No comments: