Well! Here’s the more details I promised you.
As I write this, of the 86 teams that started this race, there are 9 mushers still racing, 6 of which are rookies. Fourteen racers have scratched and will not finish the race; only one of which is a rookie. This is 1000 miles of real hardship and really tough going. BTW, all 9 of the Norwegian Teams have now made it to Nome with Tore Albrigtsen arriving in Nome at 0205 hrs 17 mar 16 in 36th place.

Now, back to my story.

About 30 minutes outside of Anchorage, we determined that we weren’t gonna make the hotel in time to freshen up and change clothes—all still in layered thermals and snow boots. We were stuck going to the Mushers Banquet in WARM clothes. The driver dropped us at the front door where we again joined up with Trenton, our Alaskan Tour Director—he had our gate passes. Once inside, Joseph and I checked our heavy coats and found our table. We had been advised that we could get a free poster (supplied by Exxon) at a table at one end of the hall. We first checked out the Iditarod store; determined that we didn’t need anything there, we headed to the poster giveaway.

After acquiring our posters, Evelyn Alexander (my new Chum from Johns Hopkins University) decided to work the room and see just what else was available. As we walked the back wall, we determined we had just about run the gamut of free stuff. However, as we turned the far corner, I recognized one of the Mushers, all of which were just now beginning to arrive for the night’s activities.

What luck! There almost right in front of us was Aliy Zirkle, probably the best female musher currently competing—she’s been in the top five (or ten) so many times in the last ten years, it’s hard to imagine her not taking the title soon. She’s run the Iditarod 15 times and has finished 2nd in 2012, 2013, & 2014; and last year coming in 5th (2015).

“Here’s our chance.” I told Evelyn. We made our way to the front of the line and talked with Aliy and got our pix taken with her. I also advised Aliy that I was really pulling for her this year. She replied: “This oughta be the year!” I had her dedicate the poster to my daughter Stephanie. Steph had asked her brother to get her an Eskimo’s autograph so I thought this was even better than that. And besides, Joseph had no chance in Hell of delivering on that Eskimo signature—unless he faked it. I scored Big-Time! 
From there, Evelyn and I started our hunt for more mushers. We first walked back over to the side where we had seen Dallas Seavey’s table but he had not showed as yet. Scooting back through the center of the room I spied the Barrington Twins and there was nobody in line to get up to them. He headed there directly. We took time to have a quick, nice chat with Anna and Kristi and scored another pix and poster signing.

Stephanie really liked the poster and promised to print off both pix and include them in the frame she is going to get to display her poster at work. 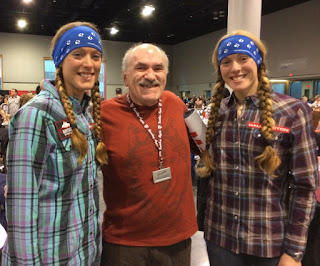 Not finding any more desirable mushers to meet and greet, Evelyn and I found our way back to our table at just the right time. Dinner was being served. The officials conducted several wild auctions for local celebrities fishing trips or catering of 6 course meals and then the important stuff started—the drawing of start spots for the race. We sat through maybe 40 of the 86 teams and decided to head back to the hotel. We still suffered somewhat from the effects of jet lag, having got to bed close to 0200 hours Texas Time the travel day before.

Posted by John Howard at 4:39 PM No comments: