I Facebooked Jimmy (Phipps) on Tuesday to see if he wanted to ride over to Bryan/College Station with me on Wednesday afternoon to attend the SFA Class of ’65 monthly dinner—my wife calls it my night out with the girls and, YES, I do know that Facebooked is probably not a real word—so what, get over it!

I should have known better but went ahead and invited Jimmy to ride over with me. Having know Jimmy since shortly after I arrived in Bryan way back in August of 1954 and entered the 2nd grade (Mrs. Miller’s room at Crockett Elementary); I know how he likes to talk. You see, I’m a story teller and enjoy that lip exercise myself—maybe just a little more than I probably should have. Jimmy and I had gone our separate ways after graduating from Texas A&M University (Class of ’69) and entering into the service of our nation in the United States Army. We finally reconnected again when he moved here to Austin early last year. 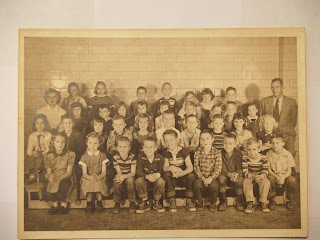 That's me on the top left right beside Mrs. Miller (I think I was her favorite) and there's Jimmy at the other end of the row sorta next to Mr. Nabors (probably been in trouble earlier in the day)

The net result is that we have a gathered boo-koo of stories neither has heard from the other. So, as one might say: “There’s a target rich environment here that needs to be exercised.

Be that as it may, I can’t really say that I got my fair share of story-telling time yesterday.

Jimmy showed up at the house an hour early—actually, I was about to call him anyway and tell him to come on over and we could catch-up a bit before driving over to BCS. I was still cleaning up and had to return back upstairs for a short time and when I came down Jimmy was sitting in the kitchen with both my pups, Little Gus and Otis, sitting attentively at or near his feet while he went on and on about some war story from Germany. He has already started to get ahead of me and I wasn’t even in the room.

Little Gus looked up as I came in the room and with his eyes tried to communicate: “Can we go outside; I think we’ve heard this one?” I rescued them (again) and put them outside in their 40X40 run and Jimmy and I went into the living room to talk more before departing. Talk is sorta singular in this instance.

After topping of the Explorer, we were finally on the road—Jimmy in fine fashion once again! His memory of “stories told” is a little out of kilter—I know I have heard most of the ones he told on the way over, but it passed the time.

I managed to sit at the other end of the table arrangement at the Outback and wasn’t subject to any of his tales during the meal. Although, I will say that Lana Reed has as many stories as Jimmy has—she seems to know every movement that takes place in Bryan and most of what happens in College Station as well—I got very little relief during dinner.

After dinner, I got some air while waiting on Jimmy to make a stop by the little boy’s room and finally we were once again side-by-side on our way back to Austin. We spent a little time bashing those that didn’t show for the meal and pretty quickly, Jimmy was back into his “war story mode.”

Every-once-in-a-while I would stutter to start a story of my own, but couldn’t get a word in edge wise. I began to study the situation—having no real luck at deciphering the code for the first fifty miles or so.

All of a sudden, something must have distracted him, maybe the light in Caldwell or something else. I had my chance and I started right in with a goodun’. I got two or three sentences into it and took a breath—big mistake! Before I could inhale and exhale, Jimmy was into another story. It was no way nearly related to my story and I could tell by the look on his face, it really didn’t matter.

That’s when I figured it out. I knew right away that I had uncovered the answer. Now, what could I do about it?

Well, I’ll tell you. When Jimmy goes into “story telling mode”, he doesn’t breath! My guess is that it’s an evolutionary development that he has worked on over the 40+ years we were apart and he has mastered it, believe you me.

This morning I started practicing not breathing while telling stories. I know I have to work up to at least fifteen minutes or I don’t stand a chance with someone who has a forty year head start; but I’m atryin’. I keep you advised of my progress.
Posted by John Howard at 3:33 PM No comments: