Last night some one thousand of us attended the Class of ’65 50th High School Reunion at the Phillips Center (old Briarcrest Country Club) in Bryan, Texas. Lydia and/or Dianna will provide actual count later as usual. What a time it was! I’m still reeling from the activities.

Wasn’t that picture taking just the best you have ever been tortured to endure? Were we ever that hard to control in the past? I bet that photographer was ready to pull his hair out. Wait! He didn’t have any hair. Maybe he has met us before, possibly individually. The Veterans pix was almost as bad, but fortunately most of us were fairly well behaved. 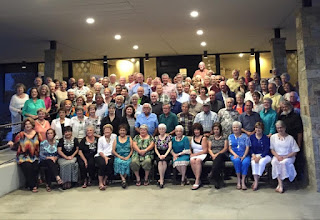 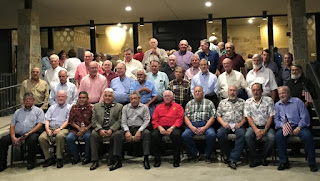 While waiting to have the shutter close on the class picture, I actually heard an utterance that almost caused the blood to drain from my head. Lana Reed told somebody behind her, at learning some recent Brazos County news, that she didn’t know that. I could not believe my ears. Could Lana Reed actually be admitting that there was some morsel of fact that had happened in the County of Brazos that she had zero knowledge of? I ask for clarification and upon assuming that I might pass on this tidbit of information, she immediately changed her story and informed me that I had misheard. Oh ya! Right! I had misheard! Ain’t gonna believe that for a minute.

I asked several people in attendance if they thought there was a stronger representation of the Bryanites in attendance than usual last night and got varying degrees of mumbles and answer dodging. The only one to answer truthfully sounding was Vernon Young: “I dunn know!”

I was tickled to get more hugs than any other attendee from the beautiful women in attendance—by my count at least.

As an aside; it was great to connect personally with many of my Facebook friends that I have almost daily contact with—catching up on their lives and the lives of their offspring.

How about that chow? For a meat and taters guy, I was OK with the pork (and slightly OK with the chicken); but where were the taters? I do rice frequently, but still gotta have my taters.

The other area of astoundment I came across was the vast number of first time attenders: how about Earnest Lee? He told me he’s a “contract analyst” for Pearson. I would have never (and I told him so) have put Earnest Lee and analyst in the same sentence no matter how I might have been challenged. I also ask him when did he stop giggling and become serious. Ernie responded: “About half way through his first day in the Air Force.”

Fantastic to see and spend time with my old buddies: Edward Herrera (my Fish Old Lady at A&M), Joe Santana (my Best Man at my wedding) and Don Taylor (who I spent many-a-hour on the back seat of his motor scooter).

I tell you that these events do not last long enough, especially when there are that many people in attendance and especially how important we are to one another. I could have spent the entire weekend talking and catching up and still have four or five hundred people not contacted yet—we just have to spread ourselves way to thin at these events. I got Dianna’s spreadsheet out this morning and determined that I made contact with 75 of my classmates. That’s far too few!

I was even getting Facebook Messages from some of those not in attendance (you know who you are Pam Perry) to take lots of pix and take good notes so I could share them today. Well Pam, I was far too engaged to spend time taking pix. Patsy did manage to get the two I attached of Edward and me. 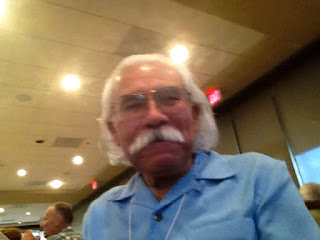 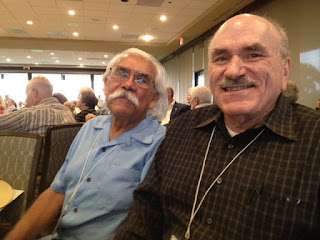 I would also like to address the alternate universes or dimensions some of seem to be traveling in. Just how did some of you guys get so OLD? There must be a dimension that periodically coincides with the one I exist in where you guys come back into focus with the rest of us. Your dimension seems to “age” people at a much faster rate than mine. What’s up with that? I can’t believe we are rolling along at the same rate; you look so OLD!

Didn’t Dianna and her committee do a fantastic job?

Sadly the evening had to come to a close. But just a little effort gets you right back here on the last Wednesday of the month to dinner with the “Catholic Girls” and a few crusty OLD Men; just make sure Dianna has you on the email notification group and we’ll see you then.

Posted by John Howard at 4:29 PM No comments: