My mind tends to wander when not engaged. I’m sorry, but this is where it went overnight.

We have seen the very last of Santa Claus deliveries on Christmas Eve, at least for the near future. This afternoon, the Director of International Acquisitions and Operations for Strain Capital, Semore Layoffs, announced the leveraged buyout of Santa Claus International, Ltd. The oldest continuously operated family enterprise and located at the North Pole has fallen on tough times as of late.

R. R. Reindeer, the official spokesman for Claus stated in a press release just last week that the shrinking of pack ice due to global warning has reduced the availability of inexpensive labor in the region. The operation has had to import workers from regions outside the regular commute, paying expenses as well, and now sees profit margins dwindling.

The company is now scheduled for a complete overhaul—the usual result for a Strain Capital acquisition. Layoffs stated that several major changes are in order starting immediately after the completion of this holiday season’s delivery schedule.

Advance personnel are already reconnoitering sites at the more-stable South Pole and the move will begin on 26 Dec 12. The first of the major changes will be accomplished fairly easily due to the current administration’s cut back in funding of the sciences—those guys in D.C. are looking to cut all social spending. The availability of adequate shelter at the South Pole will expedite the move to new facilities.

Then the big challenge begins. Where will Strain find labor? Several colonies numbering in the hundreds of thousands make their home in the area, but are mostly unskilled labor. “We all realize the obstacle that brings,” Layoffs says: “but they have met this challenge before and sees no real problem overcoming it.”

The seasonal change to a new delivery date seems to be the largest problem facing Strain and its management team. The 25 December delivery date is expected to shift to 21 June—the shortest night of the year. Semore indicated that the new date fits nicely with the organizations goal of efficiency improvements. “We don’t need a long night to get deliveries made.”

The manufacturing schedule will be augments wit temporary workers and Black Friday will be moved to the American holiday Memorial Day—lobbyist are already in place working on legislative action to reschedule Memorial Day from a Monday to a Friday holiday. “OK, we know it’s a purely American holiday and we know we are going to get pushback in this area, but get over it Germany and Great Britain!” Layoffs was quoted as saying.

Layoffs went on to point out that the increased efficiency they believe they will gain by outsourcing delivery from the tried and true reindeer powered vehicle to conveniently established organizations and a newly developing franchise in the Far East with costs will diminishing quickly.

Current plans call for the Western Hemisphere deliveries to be divided UPS and FedEx with the senior firm, UPS, being allocated the northern half and FedEx getting the southern half. These two firms have proven that they can accomplish overnight exactly what is needed to reign in costs and insure deliverability. In an abrupt and unexpected move, a niche market was cut out and allocated to the United States Post Office. The District of Columbia seems to deserve special handling—it is note quite sure the overnight schedule will be met here, but this is the current plan—maybe they deserve a little less attention than the rest; it sure seems that they have paid in kind to their constituents.

A bold plan seems to be in order for the Western Hemisphere where a start-up company, ChiEx will assume the load for this region. ChiEx has plans on the table for some interesting approaches planned to meet the overnight market and continued operations throughout the remainder of the delivery market that now exists as a very slipshod situation.

With enormous resources available—let’s just say billions here—at minimum costs, ChiEx plans to reallocate assets hemisphere wide. One of the unique approaches is the human chain where the organization will stretch out hordes of humanity from all the major population centers to the country sides and deliver small to medium packages by hand. A second approach revealed just lately is the three-person rickshaw. Utilizing two runners and a jump seat allowing the third operator to rest in turn increases the usual stamina associated with this mode of transportation two to three fold. The new mode of transportation—currently labeled the Thrickshaw—is believed to be the preferred method for the larger requirements. No images are available of the Thrickshaw were available as yet but it is believed to be a modern and sleek upgrade to current models available on regular markets.

The entire market seems to be wide open for opportunities and improvements. The biggest question remains to be the ability of Strain to complete the turnaround in the small window the plan calls for. Markets will be watching closely, as will the delivery receiving public.
Posted by John Howard at 9:41 AM 2 comments:

My Money returns and a Raise also!

I recently had the opportunity to sign up for Social Security. It was very easy; all online and not one problem. The checks started hitting my account down at the credit union almost immediately and have so for a couple of months.

The guys down at the credit union called and ask if I would like to come down and see my money, What a treat! I took them up on the offer and went down and gave the cash a look.

I was dumb founded! I actually recognized some of the bills laying there in my account. I hadn't seen them since some time in the early 70s, but I recognized them. It was like old home week. We sat there and commiserated with each other over the journey each had taken over the years.

I go back after each deposit and check out the cash. Still recognizing some of them but nothing from the 80s yet.

So, I been with this Social Security System for just a short time and low and behold I get great news. I got a raise after such a short time.

I tell my wife, with a great big smile on my face, "I got a 1.7% raise!" She, being the ever encouraging Human Resource professional she is replied: "What? Only 1.7%. The national average is 3.5%."

The wind left my sails immediately. Any more good news from my System buddies, I'm gonna keep to myself.
Posted by John Howard at 3:24 PM No comments:


It seem that this blog has become Mukluk Central. Anybody and everybody wanting to know anything about making mukluks has found it lately.

Last night I received the 15th request for my copy of Making Mukluks And Mittens With Fur. As far as I can determine, the State of Alaska has stopped printing this pamphlet and I may have the only copy still in existence—other than those who I have provided a copy when requested. 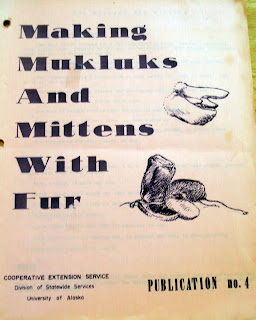 Making Mukluks and Mittens With Fur

Now, besides requesting a copy of the pamphlet, I am being ask to provide information on hides. I used to have a couple of Beaver pelts out in the garage but my hardhearted wife made me dispose of them some time back—she’s like that sometimes. I had those pelts from way back in February of 1972 when I had purchased them at the street auction at the Anchorage Fur Rendezvous—a long time ago, but no more.

I don’t have the opportunity to do much hunting any more—maybe the best I might be able to offer up is my backyard squirrel, Toby. But if I somehow manage to capture Toby just what would I do for a back yard squirrel. I betcha that his nest up in the top of the big elm out back would be hard to find a renter for—it’s pretty a good sized nest and might suit a family of squirrels. 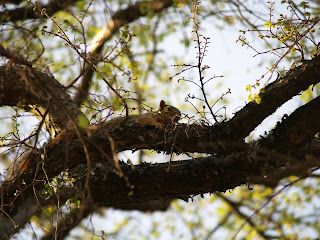 Toby, the only squirrel in Texas

I have convinced my grand kids that there is only one squirrel in Texas, Toby that is. When they happen to see more than one squirrel at a time, I have planted the notion in there minds that the problem exists with the vision and their brain: “Ya see, I tell them. Your brain is not processing light into and out of both eyes appropriately. The second squirrel you see is actually where Toby was in the near past.”

So if a family of squirrels moves into Toby’s nest, how will I be able to explain the new squatters to the grand kids? To much for me to think of right now so I’ll just have to pass on providing hides to those requesting them. Well at least for now.
Posted by John Howard at 4:18 PM 57 comments: