Reports today from the European Union Monitors reviewing the recent election in Afghanistan state that as much as one third of the votes in the election were most likely fraudulent. This raises some very serious questions in my mind when we consider continued support of their regime.

President Hamid Karzai currently has 54.6% of the vote and his challenger, Abdullah Abdullah has only 27.8% of the vote. The monitors state that nearly 1.5million of the total of 5.6 million votes show signs of fraud.

We have been there for some time and things are getting worse instead of better. This is a place with a long history of discontent with outsiders coming in and trying to press their will on a nation of Opium Poppy Crop growers whose largest trade in the world supports the drug traffic and little else.

It is estimated that 2/3rds of the population of Afghanistan exists on less than $2 US a day. This fact stands singular while one considers the following: (1) one third of the country’s GDP comes from the Opium Poppy crop and traffic in illicit drugs (morphine, heroin and hashish), (2) a geologic survey states that the country is processing 36 trillion cubic feet of natural3.6 billion barrels of petroleum and up to 1325 million barrels of natural gas and (3) the government is processing//exporting copper that could earn $1.2 billion in royalties every year for the next 30 years.

Does any of this trickle down to the population? It doesn’t seem so if they exist on $2 US//day.

The human side of this war does not get the attention that it deserves. There’s more to play here than meets the eye.

Look into it and make up your own mind.
Posted by John Howard at 3:06 PM No comments:

The switch in who has the loose wealth around the world has me worried. The economies of resources in the areas of such items as oil, electronics and even music are areas where enormous changes have taken place over the last fifty to sixty years.

The industrialization of softly derived wealth is amazing. No longer is there a corner on the market of “who’s got the bucks?” The names of the past are not the names discussed in today’s world. The Rockefeller’s, the Rothschild’s, the Carnegies, the Morgan’s and the assortment of Royals no longer are hold eighty-five to ninety-five per cent of all the wealth.

Oh, yes. Some of these guys went by the moniker of “robber barons”; but they also put a great deal of their wealth back to work in their respective countries and around the world.

The Wall Street compensation packages are right up there with the above. Is there anybody out there that is really worth $13mm, $60mm or multiples of $100mm in salary to run a company that nearly takes the entire country, or maybe the globe, under? I don’t think so!

I do not agree with the government getting into the salary governing business. This belongs to the private sector solely; but they need to start doing a better job of policing themselves. But, who is gonna be the first to do so? This is a tough task to undertake when the bidding for top talent goes on in the manner it does.

It will have to be some board of directors that really is doing the job they were elected to do.

I guess you might point out the Bill Gates of the world and his philanthropic endeavors as a bright light. I have no real good reason for singling out Mr. Gates; he just sticks out in my mind. But where are the others? There should be others. Oh yes, Mr. Dell also comes to mind as I ponder the question. There are probably many others that just don’t come to mind directly or that do the same anomalously. I can only hope.
Posted by John Howard at 4:55 PM No comments:

I have just returned from a great trip to just above Jackson Hole, Wyoming for a horseback excursion into the Teton Wilderness with my son, Joseph, and son-in-law, Michael Winters. We trail rode (if you are loose with the definition of the word trail) either 17 or 18 miles (depending on who tells the story) through some pretty rough territory: up mountains, down mountains and sometimes across semi-flat terrain (only @10% of the time).

There were eight of us, all associated with the Traveling Aggies, and two guides: one for the mule train, Carl, one for the trail ride, Dallas, (see above). We were met at base camp by a husband, Dan, and wife, Lynaa, team (fly fishing guide and camp cook). Every member of the staff associated with the Heart Six Ranch is really great people. 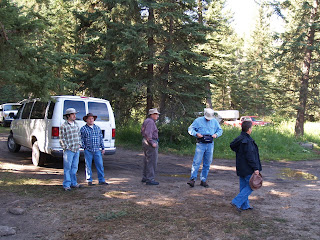 Not long after our start, we had the first real fright, a trail no more than two feet wide with a shear drop of maybe 300 feet to the river –tense moments right off the bat. We spent nearly a full six hours on horseback getting to the base camp – I might still have places that are not entirely healed from this part of the trek.
During the trip, two of the mules had a dispute with a tree causing a stampede and the loss of some food items and a fly rod or two. In spite of it all, we made it to base camp without the loss of life or limb. There is still the distinct possibility that Jake the mule may not survive the hunting season. 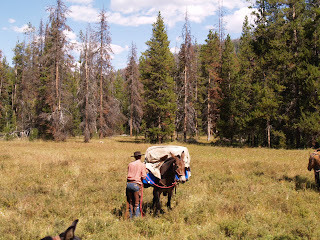 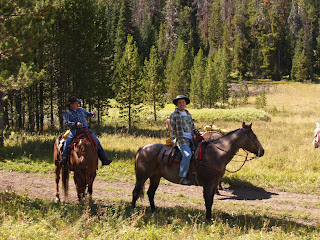 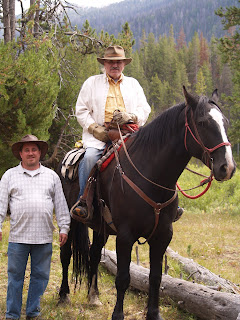 The next morning we were all up at the slightest crack of dawn and into our fly fishing instruction. One breakfast and instruction time was over; we got back astride our mounts and rode another two hours up to a place called Crater Lake for some actual fishing. I caught the first of my immediate group’s fish, a cutthroat trout, on my second cast. My son caught his first on his first cast. Michael spent a little longer with his first catch then lost it at the bank. My turn again; tenth cast; a really good one. Both Joseph and Michael took additional cutthroat also. 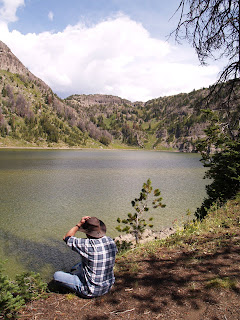 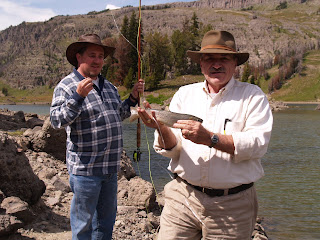 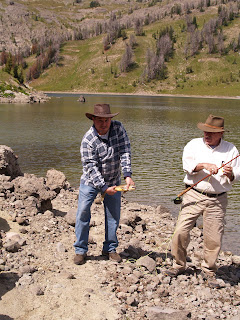 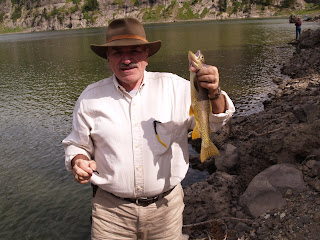 Two more hours back to camp. 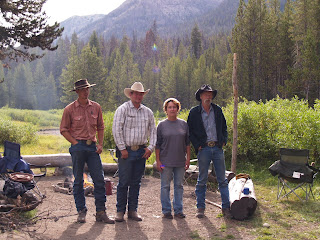 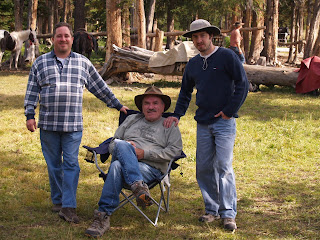 The third day out we decided to hike up the mountain and spent most of the day doing so. Michael slipped into the river no more than 5 minutes into trek and had to return to base camp for dry socks while Joseph and I waited on a log just up the trail.

About forty-five minutes into the trek, Michael asked: “What’s this on the trail?”

At this point I conducted the indoctrination ceremony initiating both Joseph and Michael into the association of those of us that can truthfully answer the question due to first hand knowledge: “Does a wild bear shit in the woods?” 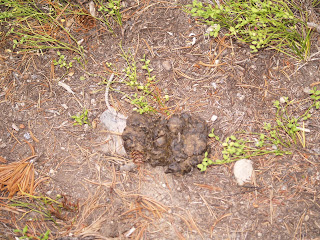 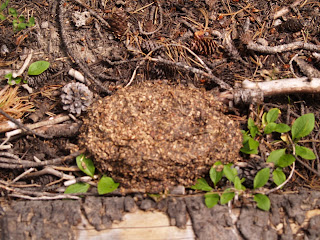 We eventually hit a point in time that we had pre-decided as our turn back time still having not reached the tree line with nightfall on its way; we turned back down the mountain. 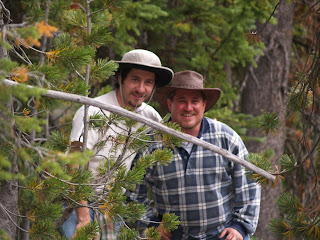 Before leaving base camp close to noon, the guys and I had a discussion about what we were gonna enjoy the most after we get back to the trailhead. Michael’s vote was for a shower. Joseph’s vote was for a decent place to sleep. I, on the other hand being the aged member of the group, voted as the most looked forward event upon return to civilization was “getting off that horse for the last time”.

The forth day we packed up and returned to the trailhead for our trip back to the ranch and our first shower in four days. This time we were all just a little more experienced and the trip took only a little over four hours.

That evening, we had the biggest moose burger one might ever experience prior to going off to dreamland and our flight back to Texas the next morning.
Posted by John Howard at 4:21 PM 2 comments: