Tickets in the Nose-Bleed Section – Part 1

My son (Joseph) is a fan of the Texas Rangers—the ball club, not the law enforcement unit. While he might publicly support the baseball team fielded by the later, for social protection if nothin’ else; he’s all about the baseball team from Arlington, TX.

Now he isn’t a season ticket holder but he tries to see as many games as possible. My grandson (Dilin), the former DIT—he turned twenty as this was being written and is no longer worthy of the disinterested teenager title—doesn’t share as much enthusiasm as my son, he is up for a good time wherever it takes him.
Originally my son had the notion of following the Rangers on a road trip. That turned out to be prohibitively expensive so he decided to just see them play at least one road game and take in a couple of other parks along the way. The grandson was really up for this idea as he missed out on the horseback and fly fishing trip to Wyoming a year or so back—straddling his birthday I might add—primarily because school was starting at the same time. This time he wasn’t taking no for an answer.
Joe studied the schedule and devised a trip that allowed us to take in four MLB games in three cities with only three other travel days involved—pretty good work. We laid out a course, set the dates in stone and he started getting tickets; a fairly major trick at some of the parks he had picked. He went after the lowest priced tickets available—that’s where the nose bleed reference becomes effective. Ordering on-line, soon he had the tickets and now all we had to do was wait on the departure date to arrive.
Tuesday
Living in Austin, this added another travel day on each end but just for me—neither Joe nor Dilin considered this much of a drawback of course. So on the 16th of August at 2:15 PM, I said goodbye to the pups, called the wife to leave a message (she didn’t answer) and I departed for the Grand Stadium Tour (GST).
I had a little over twelve hundred miles to Chicago, a full tank of gas, no cigarettes whatsoever, it was extremely bright outside and I had my dark glasses on, a full canister of pimento cheese and a jar of peperoncinis on ice, tickets in hand (Joe actually had ‘em): Hit it! The one drawback to the entire adventure as I saw Austin in my rear view mirror was that there would be no more Tex-Mex for the next week—Tex-Mex above the Red River just isn’t right.
Wednesday
After spending the night at my son’s house in Forney, we were ready to Hit it! By 8 AM we were making our way through the Dallas traffic and on our way to Oklahoma—not because we wanted to, but it was in our way and too far to go around. Close to 1 PM and in downtown Pryor, OK, we dug into that pimento cheese stash—the first of many times.
Right at 5 PM and moving against rush hour traffic we negotiated our way through Kansas City, MO, our first stop on the GST and 742 miles into the trip. We had made good time and were earlier than we had planned—largely because I was voted down as we drove through McAllister, OK and didn’t stop to see the Will Rogers museum.
This put us in line to make our first major decision—a no-brainer; we would just add another game to the list. The Yankees were still in town and we had time to get to the ball park (Kauffman Stadium) in time for the first pitch. In no time, we were on our way. 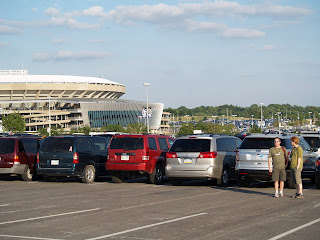 Ready to head in to the ballpark.
After paying our $10 parking fine (one lot from the gate) we got a couple of dogs each and found our seats. The last time I had seen the Yankees and the Royals play was in the American League Championship Series in New York (Yankee Stadium bleachers) in 1980. That game was over when George Brett hit one into the right field third deck stands. 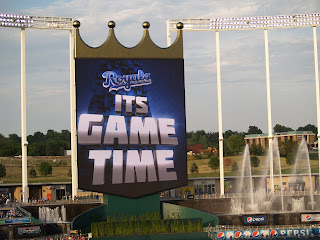 I was hoping for some restitution this evening but even with Derek Jeter going 4 for 5, it didn’t happen—the Royals won. 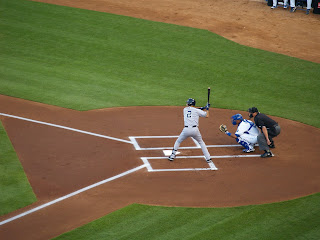 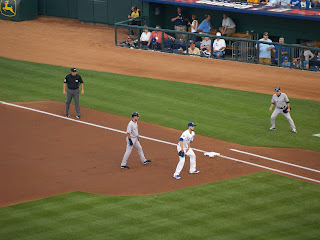 Another hit for Jeter!
KC took the game by a score of 5 to 4, although being out hit by the Yanks 10 to 8. The KC winner was some guy named Chen—I had never heard of him, but he did a pretty good job. Actually I didn’t recognize many of the players on either side. Being away from a major league city has that effect on you—Austin being gobbled up with longhorn coverage and little else.

I did get me a stadium bought Royals hat and wore it to the game and again the next night. Having not counted on this opportunity, I had left my Yankee Stadium bought Yankee hat at home.
The attendance this evening was 22,435 and I felt the entire time that we were in a AAA ballpark—it just had that feel. The between inning activities: the ball under the hat game, the kiss-cam and the like was just as though we were at the Round Rock Express Dell stadium to see one of their games. It’s all in the way the management engages the fans.
Stadium hats are a big thing in our family. I believe Joe has more than I do but he can no longer find his Yankee hat so I consider myself (qty no matter) in the lead still.
We did start to get fairly use to the navigation tool in my new Ford Explorer—we called the voice Lady and let me tell you one thing: you pay attention when Lady talks or you’re gonna get into trouble—Lady seems to always be right.
Thursday
Up early and down to the ½ price breakfast buffet—convinced they were gonna loose money on my plate—we were still contemplating what activity we would take on for the day until game time came around. Discussed over the meal, we decided on the Harley-Davidson factory tour to start and then see what else we might find available. Grabbing a stash of brochures as we passed out the door we trotted.
The Harley Power Train & Assembly plant was very interesting and everything was made to order. I was amazed that there was not one machine in the plant that I had not had experience with during my days managing manufacturing operations—not one. There was boring & honing, metal stamps, a paint line with power coat ability, robots welding (all over the place), a powered assembly line and managers walking the floor. I guess the only operation we saw that I haven’t managed was the laser cutting area ( I have seen them before, but not directed their operations). I felt like I fit right in. 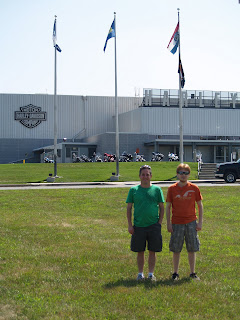 Ready to check out the Harley-Davidson Power Train & Assembly Plant. 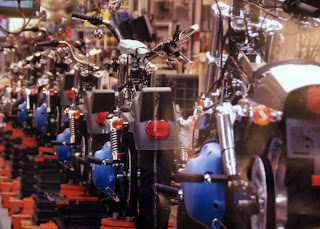 Photos weren't allowed inside the plant area, I did manage to get one with my button camera.
Dilin had become fascinated with taking in the $40,000,000 display at the Kansas City Region Federal Reserve so that’s where we ended up next. It wasn’t that impressive to his dad nor I as we deal with stacks of shoes in our closets or accumulated junque in our garages that are routinely worth that much.
After the Fed we headed to the nearest Kansas City BBQ restaurant, Jack Stack Barbeque in downtown Kansas City. Good eats but I can’t say much for their sauce. They had two varieties to offer: one tasted like nothing more than ketchup and the other, the spicy blend, just wasn’t that spicy. I offered to come back later and show them how to make good BBQ sauce—after the trip was finished. They didn’t seem impressed with the offer and we didn’t have time to argue the point—their loss. 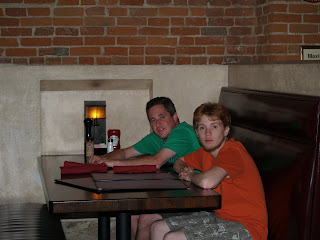 KC BBQ at Jack Stack's.
Having our fill of KC BBQ, we departed on a search for crazy little women and a bottle of Kansas City wine and finally found the corner of 12th Street and Vine. Everybody lined up to have their picture taken but I am sad to report there was not one crazy little woman in the area nor any bottles of wine—probably a good thing at least for me anyway. 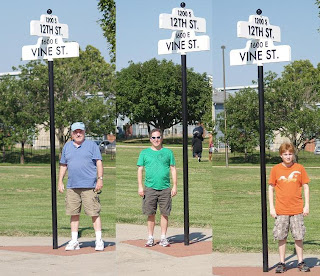 Composite of the three of us at !2th Street & Vine - Just lookin' ya know!
Quickly back to our hotel to rest and clean up some then off to the ballpark.
Another $10 parking fine, a couple of dogs and we were in our seats. I forgot to mention earlier we were twelve rows up in the top (4th) deck yesterday and today we were on the front row of the top deck—both sets were good seats with good views.
The attendance this evening was down from the previous night—even with the game closer to the weekend—20,547—you could tell that the Yankees had left town. I’m not sure but I don’t think they can get in many more than 45,000—maybe by selling SRO tickets in the outfield but not many more than that.
The game this evening was a bit different from last night as the Red Sox sent Josh Becket to the mound. He completed seven innings, got the win, gave up seven hits, three earned runs and had four strike outs. The Red Sox on top of a 4 to 3 score and Becket’s 10th win. 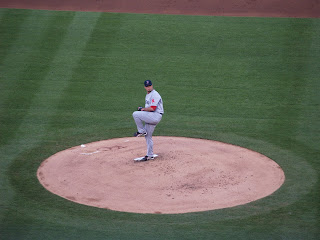 Josh Becket for the Red Sox. 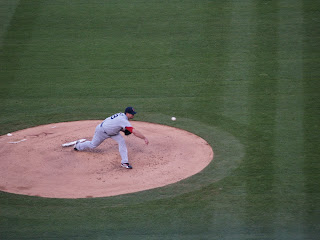 I always wanted to try to catch the ball in flight and finally got one.
We did have some otherwise fun watching the Red Sox new designated hitter, Ryan Lavarnway (#60), make his first four appearances at the plate. He finished the night with the same batting average that he started it with—0.000—he eventually got a hit the next evening. Actually to their website, he is no longer on the active roster—too bad he didn’t make it. He had a chance to have hit 1.000 the first time up and see the scoreboard with a perfect batting average when he came up for his second time. He also missed out on a .500 average and a .333 average—if he could have just gotten a hit—just one. 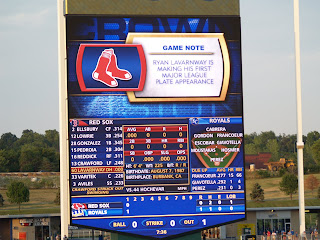 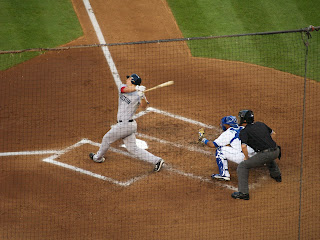 It just wasn't to be - a tall fly out to right.
There’s more to come—please stand by.
Disclaimer – I don’t own a button camera.
Posted by John Howard at 2:48 PM