Do you remember the Texas Prison Rodeo in Huntsville?

I remember it very well. Those Sundays at the Walls Unit in Huntsville in October usually with my Dad were times I will never forget.

I remember going there soon after arriving in Bryan in 1954; this time with my Dad, Mom and brother Kenny. We probably made several trips as a family, but that was to soon give way to the jaunts being just my Dad and me. 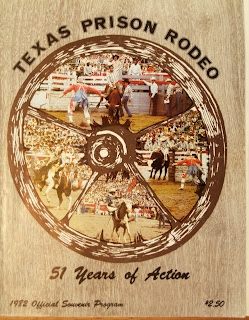 I remember a couple of times—maybe about the time I was 12 or 13—that Preston Bishop joined us on a Sunday afternoon. Of course I knew Preston as Cathead more than his given name. Cathead was an old doodle-bugging friend and confident from the 1940s and early 50s. I would never miss the opportunity to sit and listen to the stories these two would tell about their days in the seismographing industry (locating potential oil fields). The stories those two could tell—most hard to believe, but nothing less than the truth. 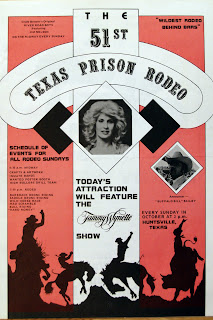 Well, it seems that they are now tearing down the structure that housed those Sunday memories. There hasn’t bee a rodeo conducted there since 1986 when the structure was deemed to be un-safe. Funds availability to repair//rebuild found it hard going against other budget items determined to be more appropriate. See Associated Press and Austin American-Statesman article: http://www.statesman.com/news/texas/workers-tear-down-famed-home-of-texas-prison-2102847.html?cxtype=rss_ece_frontpage

I remember when halftime would come and they would roll out the afternoon’s professional entertainment. Some big names; usually of the country-western variety would perform. The article mentioned names such as Roy Acuff, Willie Nelson, John Wayne and Steve McQueen—all good Google terms for hit-ability. There were plenty more just as visible that made their stop on a Sunday in October. 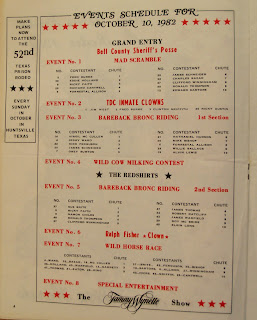 I remember one that the article mentioned; I couldn’t wait to see. The infamous Juanita Phillips—more recognizable as Candy Barr, her stage name—was the one I most wanted to see. I don’t know what my young teenage mind expected to see when the Goree Girls made their entrance—to a teenager, a stripper is a stripper no matter what the program says—a performed their short act of two or three songs. The prisoners on the lockup side were just as or maybe even more excited than I was at the time. 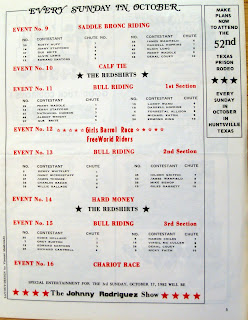 I remember the event called “Hard Money” referenced in the newspaper article written by the Associated Press’ Michael Graczyk. I don’t think that Mr. Graczyk ever attended a Sunday performance—maybe a rodeo ever. His description of the Hard Money event made it out to be the most dangerous event in the afternoon’s performance. Forty inmates trying to snatch a tobacco bag from a bull’s horns is exciting—especially when accompanied by the fear of being gored//trampled by the bull; but much more the threat of being knocked over by the hoard of fellow contestants and trampled by them or either them and the bull in the frakus can not be understated. There was also the Wild Horse Race and Mad Cow Milking; both very similar to the Hard Money event. But, in my esteemed estimation these were by far not the most dangerous event of the afternoon. ANYBODY that ever attended a Sunday in October could tell you this.

I remember exactly what the most dangerous event of the afternoon was. Anybody that has seen a rodeo will tell you that the most terrifying one second to maybe twenty or so that takes place is the bull riding. No occupation—with the possible exception of Alaskan crab fishing is more dangerous or so the authorities tell us. Just ask a crab fisherman if he//she will sit the back of a bucking, snorting, wheeling, whirling bull and you will get a resounding NO! Right, bull riding is far more dangerous. Now multiply that danger by a factor of ten. There you have it—real danger. The announcer behind the chutes would warn the audience prior to the start of each and every rodeo. It went sorta like what you might imagine: “If you are squeamish or upset easily, it is suggested that you leave the arena right now. What you are about to see is not for the faint of heart.” Time was then given for the cowardly to exit. 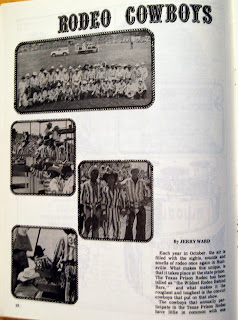 I remember what would happen as soon as the cowardly time was up. The announcer would then describe what was to take place—the Prison Rodeo in Huntsville being the only place one could find an event as dangerous as what was to come. Most of your rodeo arenas had four, six or as many as eight chutes for the bucking//riding events to emerge from, but Not Huntsville—there were ten. All ten were loaded and ready. At the sound of a whistle all ten chutes were pulled open and 10 bulls with their 10 riders would be let loose into the arena, all at the same time. The event was called the Mad Scramble; an appropriate name—yes it was. Mayhem erupted into the arena and mayhem continued until the last astride rider was thrown, recovered and usher out of the arena—all the while the 10 bulls were running loose causing what mayhem they rapt. 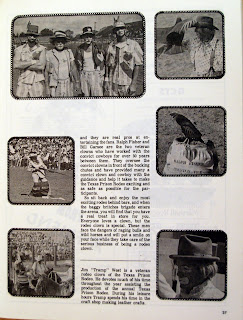 I remember going to Huntsville eight, ten or maybe even twelve times and having seen many dangerous events throughout the northern half of the western hemisphere; but I have never seen a more exciting twenty seconds or so anywhere else in that region. Quite possibly there is not another twenty seconds of planed purely voluntary mayhem anywhere in the world.

I remember the one time that sticks out more in my memory than any other. I was probably thirteen at the time and my Dad and I had seats about three rows up behind the chutes on the right side looking into the arena. During the bull riding event, an inmate made a ride that will always stick out in my memory as the best ever. It so impressed my Dad that he actually said the same out loud—a very unusual occurrence I can assure you. The guard positing directly in front of us must have heard my Dad’s comment. He turned and looked back up at us and said: “He might even get better over time. He has ninety-nine years to practice!” His editorial on the ride has always stuck with me. At the time I couldn’t imagine anything lasting ninety-nine years. 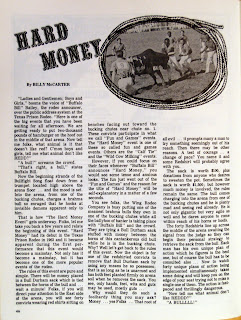 I remember the last time I saw the rodeo. I took my wife and kids on the 10th of October in 1982 during the time I was stationed in Bryan briefly after departing the Army. It had now become my turn to take my son (and daughter) to the best rodeo anywhere. Their only experience up until this time was a two chute event we had attended in New York staged on a race track; the entire arena less than the size of a basketball court.

I remember that my wife tells me I spend too much time in the past: I’m still happy that I can remember these times when others my age are can’t.

I remember it all like it was yesterday; but will be never again. Do you?