Tickets in the Nose-Bleed Section – Part 4


After a two summer delay, the Grand Stadium Tour II got underway with converging flights to Boston, MA—Joseph coming from Dallas via Kansas City and Milwaukee and Patsy and I from Austin via Nashville. Joseph arrived some two hours ahead of us due to weather on our adjoining flight coming into Nashville from who-knows-where. Dilin could not join us this time due to a scheduling problem associated with school and his night job—too bad!

By 0900 hours, we  had dropped off the Pups and cleared security at the Austin airport. By 0920, I was holding the second hottest cup of coffee ever produced—why do airport concessions have to make their coffee so HOT? By 1125, we were in the air and headed for Nashville. I was sitting next to a nice young lady named Marie, a grant writer for the Austin Mexic-Arte Museum who was headed to Boston for three days of work and then to Maine for a friend’s wedding.

Southwest was on time to Nashville where we had a two hour layover. Around to 1320 hours, I searched out Gibson’s Café and tried to order a chicken fried steak. Both James Lee Carter  and I had tried in 1970 to get a chicken-fried in Nashville and were turned down flat—waitress said: “Not only do we not have chicken fried steak, we don’t have steak fried chicken either.” My friend and I were on our way to Ft Lee, Virginia start our careers in the Army at the time. It seems that in forty plus years, there has been no forward development in Tennessee. Patsy and I settled for a Burger King combo meal.

The connection aircraft to take us to Boston was late arriving due to weather and its departure airfield so we were delayed some thirty minutes getting out of Nashville. On this leg, I sat next to Bill, a young man traveling from Colorado back to Boston for a few days and eventually up into New Hampshire (his original home) for a friend’s wedding. A lot of wedding party people moving about the country today—most of them sitting next to me. Joseph had to wait for some two and a half hours on us at the airport. We caught the Hampton Inn shuttle and were eventually at our first destination.

Unpacked, we headed back downstairs and got Jimmy, the shuttle driver to haul us over to Jeveli’s Italian joint where we had a filling meal—not much taste involved, but filling just the same. If you go lookin’ for Jeveli’s, it is right next to the Neptune Laundry and across the street from Boston Car Keys. While we were waiting on our chow, the upstairs of the café unloaded. It looked like forty guys pored out of the room and all resembled members of the Boston Mafia I had seen detailed on the Whitey Borger trial updates over the last month—a gruesome looking bunch.

After breakfast, I placed a call to Sherman D. Roberts—a friend from Stephan F Austin High School and Texas A&M University. We hadn’t seen each other in forty plus years and decided to get together for lunch sometime in the middle of the day.

0900 hours, the Old Town Trolley picked us up at the Hampton and we headed out to re-discover Boston. Thinking we would ride around and determine the best areas to visit after getting the lay of the land.

Our first stop was Paul Revere’s house (built in 1680 and bought by Revere in 1770), most of which is original; well the frame is. From here, we walked over to the Old North Church (real name - Christ’s Church). I looked around and found, by accident, a pew that Theodore Roosevelt had sat in during 1912—as much as I admire TR, I had to sit in this pew for awhile, at least during the guides lecture. One side note, the church had the oldest pipe organ in the United States.

Back on the trolley, we searched for a stop near a transit point so we could meet up with Sherman. Finding one, we were in Cambridge’s Harvard Square waiting on Sherman to show.

Sherman arrives and directs us to his Natasha’s favorite pizza joint and we order lunch. The slipped some tofu into my salad, but I managed to eat around it and didn’t become sick. We spent an hour or so catching up on mutual acquaintances and who-shot-John before Sherman gave us a personal tour of Harvard Yard. We even snuck in the back door of the chapel—front was locked—and looked over the inside. Amazing to see some of the places you have only read and heard of all your life. 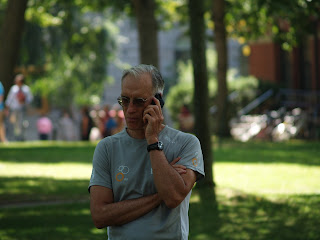 Back on the trolley, we visited Faneuil Hall, Quincy Market (oldest market in US) and the downtown Cheers replica tavern killing some time before time to head to the ballpark. While drinking a beer in Cheers (replica), a couple from Nova Scotia sits down near us and we strike up a conversation covering baseball and hockey. One odd point, because of where these guys lived, they had to go north to get south. They were really interesting.


We soon found the blue line train (nice and new) to Fenway Park, switched to the green line (old and crowded) and walked the gauntlet of vendors for several blocks to arrive at our designated gate. Inside finally, I bought myself a Boston Red Sox cap, a couple of dogs and a coke.

Here to see the Red Sox take on the Baltimore Oriels, we climb up the tunnel to field level, and then 34 rows up to our seats—noses began to bleed—and found ourselves just six rows from the top. Huffing and puffing, we made it.

Soon we are joined by a bunch of college guys from Canada wearing purple shirts (2 had on red). Turns out they were a groom’s party. They made racket during the entire game, unmercifully picking on the Baltimore players. Just after the purple shirts got under way, one of Joseph’s former associates, Kim, joins us for the game—she now resides in the Boston area.

Baltimore starts out the game like they are the team leading the division instead of Boston, scoring in the first inning. Then things loosen up a bit and both Baltimore and Boston score in the 3rd.  Through the 6th inning, we have seen two home runs over the Green Monster (one by each team – Machado-Baltimore and Davis-Boston). Baltimore leads going into the 7th, but fail to score. Boston ties the game in the bottom of the 7th causing fear of extra innings to set in. 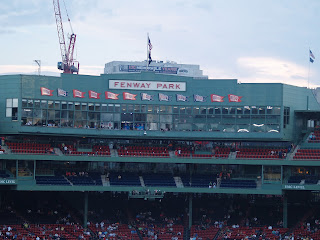 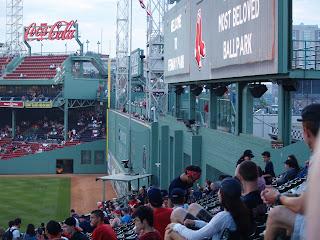 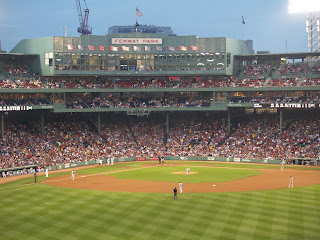 The Game is on!

Boston’s Mike Carp pinch hits for third baseman Bogaerts and smacks a Texas Leaguer to shallow left just over the outstretched glove of the Baltimore third baseman scoring  Jarrod Saltalamacchia  and sending Stephen Drew to third. Carp is replaced by pinch runner Will Middlebrooks, who stays in to play third in the top of the ninth. But that’s where the rally ends with Boston ahead. The Boston closer Koji Uehara comes in for the 9th and three outs later the game is over.

Even though the Orioles seemed to be able to put runs on the board at will, I had the feeling that the Red Sox were never out of the game and felt they could do what it took to win.

We made our way out of Fenway and ran the gauntlet one more time to get to the trains—worse now than getting to the park. The Green Line was really crowded but room cleared out when we switched to the Blue Line for the trip out of downtown to get to the Hampton. We were finally in the sack at 0045 hours.

We made it downstairs for a lazy breakfast and caught the shuttle over to Wood Station for another trip into Boston; this morning heading for the U.S.S. Constitution.

The swabbies lecturing the ship tour were all in the 20 – 22 year old range, but did a fantastic job of telling their stories. The ship and its accompanying museum are very much a class act.

After our visit, we are back on the trolley and heading for the tea party ship anchored in the downtown harbor. We had been there in 1979 and wanted to get another shot of Joseph tossing the tea over the side. The re-enactors conducting the tour were fantastic at their jobs as well—these guys made the adventure well worth the time spent. And yes, I got a shot of Joseph  tossing tea! 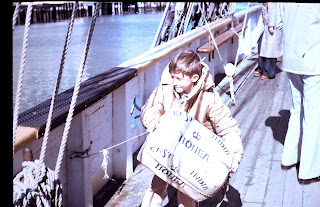 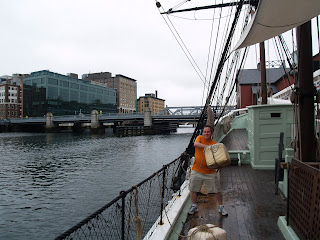 Departing the ship, we felt ready and energized enough to take on the Red Coat Regulars ourselves.

Soon, we were again on the trolley, this time headed to Beacon Hill. When the driver found that we were getting off at 8 Beacon Hill, we were serenaded to “Where Everybody Knows Your Name”—everybody on the trolley singing.

Down the steps, we enter the real Bull and Finch Pub (Cheers) and start with a beer. Having not eaten since breakfast, we decided to have dinner here. Patsy orders a pinini, Joseph goes for a Reuben and I take the Norm Burger Challenge—ya gotta live sometime, I’ll show them.

Man, that burger was big. It stood about eight inches tall on the plate which was full of fries also. I dug in and got after it. I managed to do the burger in and the beer also but had to go wash up after finishing. Back from the hand washing, I found that I had been inducted into the “Norm’s Burger Society,” complete with a certificate and all—waitress told Joseph that very few ever finish the burger and even fewer clean the plate completely. What an honor! And all I had to do was bite, chew and swallow. 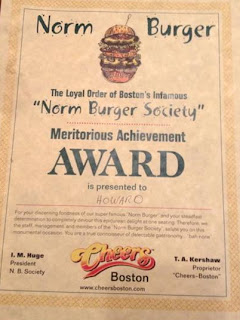 To walk off the eats, we walked across the street and strolled around the adjacent end of the Boston Commons (America’s first public park). We felt right at home with all the pigeons, squirrels and ducks.

Heading back downtown, at one of our station changes, I noticed we were at the Scollay Square Station at government Center. I had been singing a portion of the Kingston Trio’s 1959 hit M.T.A. all the time during or adventures around Boston and now here I was right in the middle of the song:

“Charlie’s wife goes down to the Scollay Square Station every day at a quarter past two,
And through the open window she hands Charlie a sandwich as the train goes rumbling’ through!

Did he ever return?
No. He never returned!
And his fate is still unlearned. (Poor ole’ Charlie)
He may ride forever ‘neath the streets of Boston,
For he’s the man that never returned!” 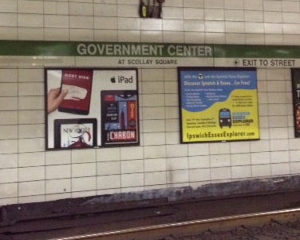 Arriving back at the Hampton, this effectively finished the Boston portion of this years’ Grand Stadium Tour II. We had now been to a game in the oldest Major League ballpark—Fenway Park—what a thrill!