Leaving the Comfort Inn & Suites, we headed toward the center of Victoria, the oldest town in Canada on the western side. We were ready for the seafood. Following the directions given to us by the guy at the motel, we kept an eye out for the Grand Hotel—he had said we couldn’t miss it, and we didn’t.

Driving slowly along the street we were directed to watch for, there it was: “Pescatore’s Fish House.” Next, we had to find a parking space in downtown Victoria. That didn’t turn out to be as hard as expected. Right on the docks, we discovered a lot with plenty of open spaces—like nobody had discovered it before. After purchasing three hours of space rental, we headed back to the “best seafood spot in Victoria.”

We were greeted by the hostess and I announced that we had just driven in from Texas and were hungry—stretching the truth just a little. She replied that they had a room full of reservations that would be showing up real soon as the dinner hour was approaching shortly. Giving her the benefit of-the-doubt, we agreed to be seated at the bar. This turned out to be a real bit of LUCK!

The bartender, Daniel, immediately greeted us and ask if he could get us something to drink. Joseph and I ask for the best local brew and were served up a tall glass of Blue Buck Ale 2X—it hit the exact spot. Dilin, under-knowledged in the Beer fare ask for a smoother brew and Daniel brought him a Glass of Phoenix Lager, another local beverage.

Daniel then presented the daily menu to us and we discussed the pros and cons of each entrée. I told him that I had a hard time getting past a fresh salmon anytime that it is offered. While we discussed the salmon, Dilin ordered the halibut. Daniel continued his descriptions pushing another dish, a local favorite. Daniel’s recommendation was Chef Marcelo Najarro’s Miso Glazed Sablefish. The preparation sequence sold us on the dish—both Joseph and I ordered it.

Daniel then returned with some fresh bread and an oil and pepper dipping sauce that was also just right. We dug right in. I inquired about his past and Daniel discussed his upbringing, where he had lived and that he had a family in Oslo waiting for him to finish his “wine schooling” that he was currently on the last leg of here in Victoria—a very interesting life so far.

While we sat and savored our lagers, Joseph started naming off the bar bottles that he had previously sampled on his journeys. Now, neither one of us are lushes but we had sampled quite a few as we went from shelf to shelf. I then noticed on a top shelf a bottle of Yukon Jack—it resembled a stepchild the way it was sat back and contained only about an inch of liquid—Daniel listening to our conversation all the while. He inquired about my interest in the bottle of Yukon Jack and I responded that it had been a favorite of mine while I was serving in the Army. He ask how I liked it and I replied that I had discovered a mix of my own concoction: Yukon Jack and Cream Soda. He had never heard of anyone mixing it that way.

We continued our discussion as he served up someone a whisky sour. I challenged his mixture and related a story that took place while I was getting my Master’s Degree and having to travel back and forth to McGuire Air Force Base in New Jersey. We all got a good laugh and continued our evening. I noticed that Daniel had gone to the cash register, removed some cash and handed it off to the floor manager with what seemed to be specific instructions.

About this time our dinner arrived and we dug in again. Daniel had been right, the sablefish was FANTASTIC! I shoved a forkful toward Dilin as he passed a fork full of halibut toward my plate. The fare was all special. I do not remember tasting another seafood plate as smooth as the sablefish, especially the way it was prepared.

The floor manager returned about this time with a can of cream soda from the small grocery around the corner. Daniel apologized that all they could obtain was cherry cream soda but offered us all a Yukon Jack//cream soda cocktail. Boy the evening was just about perfect now. To top off our dinner, we each had a bow of ice cream.

Settling up, we headed for the street. I noticed that our bill did not include the cocktail. Daniel was a standup Guy. If I ever get back, I know where I will eat in Victoria, BC.

Back on the street, the city was now under lights and looked very pretty. We strolled for awhile and remained to watch a street performer set up and then present her show. 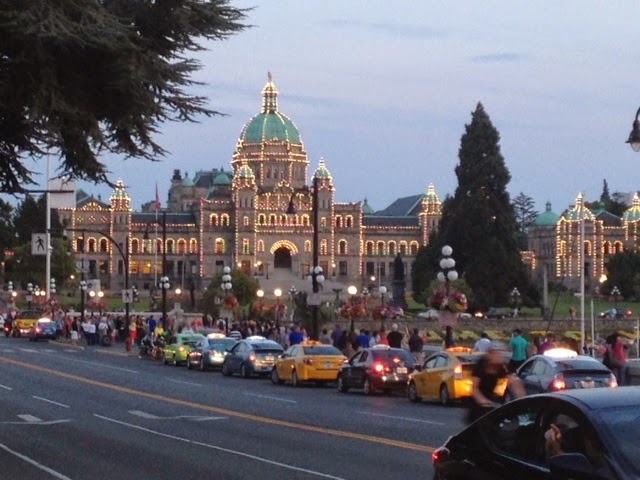 The Provincial Capitol, Victoria in the early evening 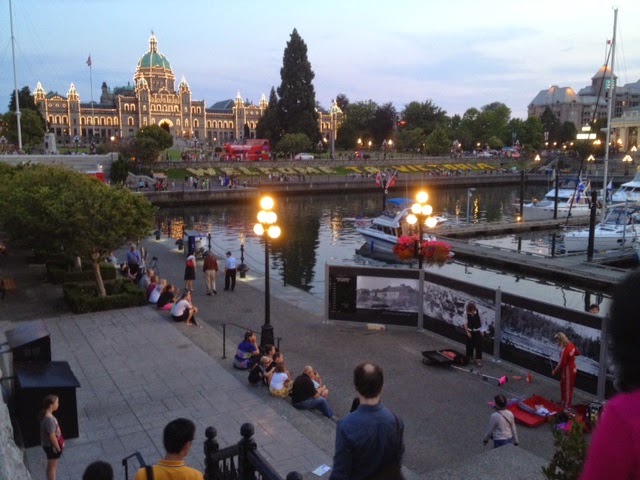 Street performer setting up her performance. She was real good
and received a wealthy contribution from the crowd.

We headed back to the Comfort Suites for a good night’s rest and an early morning heading back to the ferry and Vancouver and a BALL GAME!
Posted by John Howard at 2:40 PM