Seth Weinstein is in Miami to get married. His fiancée, Tina, is the elder daughter of the rich and powerful Mike and Marcia Clark. Everything, but everything has got to be perfect for Tina’s wedding. This is not in the cards for Seth.

Given a chance to meet anyone in Miami and the surrounding area, Seth will encounter trouble. The Groom Posse, Big Steve, Marty and Kevin will make nothing easy and manage to screw up at every turn.

Even Tina’s sister, Meghan, gets into trouble assisting Seth in his efforts to do the right thing: assisting a Haitian mother of two illegally make her way to join her sister in a new country. 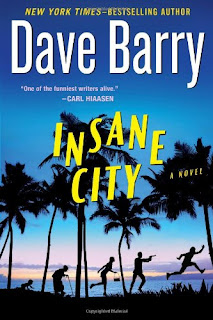 The plot even includes a barely working orangutan, Trevor, who emotionally attaches himself to the nearest good looking woman and is wounded in a gun battle with Daddy Clark’s hooligans trying to intercede in the Haitian affair.

Some of the book is much funnier than other parts, but a good read overall. I will say the hour I spent listening to Dave Barry at his local book signing was the funniest hour I have spent in a long time. In person, the man is knock down funny.
Posted by John Howard at 6:09 PM No comments:


I did. I saw Jackie play! Of the multitude that might take the trouble to read this, I am probably in the minority that actually saw Jackie Robinson play baseball for the Brooklyn Dodgers. I’ll get back to that later—there’s a few things I want to discuss first. The 14th of April, 1947, some 66 years ago today was a big day in Baseball. If one puts their mind to it and discounts the fact that it was a sporting event, the single act of playing a baseball game that day is as BIG as only a ever dwindling few alive can imagine. 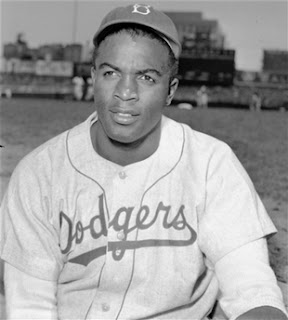 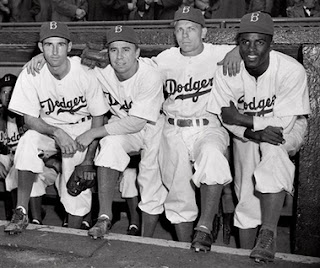 At the time the NFL and the NBA were still fringe elements in the culture of the United States of America—Baseball was king. All other sports were also runs.

Let me ask you this: What momentous events in history stick out in your mind when you think back? 9/11 is  probably the most notable for most. T an ever decreasing few, the answer to the question centers around World War II: December the 7th, D-Day, Victory over Japan and big events like those. The next few generations probably recall watching the landing and walking on the moon—a momentous step, to say the least.

Keeping in mind the steps taken on the beaches and the moon; now, I would ask you a followup question: Was the first step on the moon a bigger step in the cultural history of the United States than the step taken by Jackie Robinson (backed by Branch Rickey) when he left the dugout that afternoon into the previously all-white realm of Major League Baseball? That step, arguably, was the shot heard ‘round the world in advance of the civil rights movement of the 50s, the 60s and decades to come.

The event came much earlier than I and my first memory of big events—but not much earlier in a life that has seen many biggies transpire. 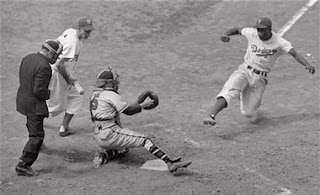 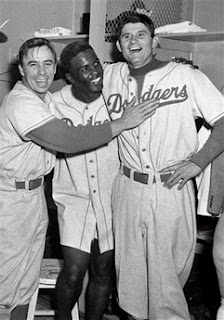 In the summer of 1951, life found my family residing in our 40X8 foot trailer in the small mid-state Illinois town of Taylorville—real small town of Taylorville. My dad worked for the oil exploration company Geotech and we moved around a great deal. We lived there for only a few months, but looking back those were fairly active months. Dad and Mom always wanted us, my brother and I, to experience as much as possible of the notable spots our traveling gave us the advantage of proximity. One weekend we spent in the Illinois capitol of Springfield—the first city of which I have memories.

The next available weekend, we traveled to St Louis, Missouri. I was as excited as my dad. We were going to take in the Cardinal game. My dad was the biggest baseball fan in the world—as far as I knew at the time. I thought I was the second. We never missed a Cardinal game on the radio. You might recall that the Cardinals were the farthest west team in the major leagues at the time and actually they were all you could get on the radio. Still that was OK with me—they were my favorite.

I was on my way to see Stan The Man Musial (6), Country Enos Slaughter (9) and Red Schoendienst (2). The cards also had such names on their roster as backup catcher Joe Garaoligo, Harry Walker and Peanuts Lowery. Sportsman Park, here we come!

The opponent that Saturday was the Brooklyn Dodgers. Some legendary names were on that roster as well. Our excitement level was as high as a kite. Tickets were purchased and we were making our way to our seats. As luck would have it, our trek took us right in front of the visitors locker room just as they filed out to make their way to the dugout tunnel—there they were right in front of me, the Brooklyn Dodgers—I coulda reached out and touched them.

One by one, as they made their way to the dugout tunnel my dad would point out and name each one as they passed. He recognized them from pictures in the newspaper, the only visual media at the time—long before TV was widely affordable and available. Still now, I can close my eyes, lean back and see them as they walked right there in front of me: Roy Campanella (39), Pee Wee Reese (1), Jackie Robinson (42), Duke Snider (4).A few other Dodgers present that day that my generation will remember: Don Newcombe, Ralph Branca (he who threw the other shot heard ‘round the world that allowed the Giants into the 1951 World Series), Preacher Roe, Gil Hodges, Eddie Stanky, Carl Furillo, Dick Williams (rookie in ’51, but the A’s manager in ’72 & ’73 World Series), Wayne Terwillger (34), and Carl Erskine (17).

That’s enough with the name dropping—but, they were all there. 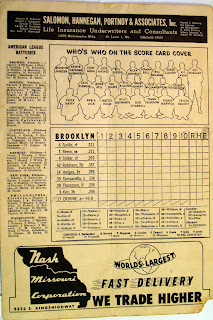 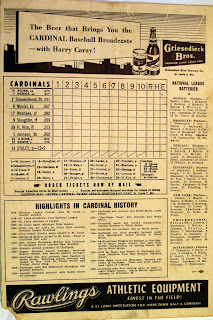 
Count them up: Cardinals—Stan Musial (6), Enos Slaughter (9) and Red Schoendienst (2) and Dodgers—Roy Campanella (39), Pee Wee Reese (1), Jackie Robinson (42), Duke Snider (4) and Dick Williams (38); all future Hall of Fame members; eight in that single game in 1951. You’d be lucky to find two future Hall of Famers on the same field in today’s game.

The Cardinals won that day by-the-way.

Here’s my point: without that day in April, 1947, three of the eight above may not be in the Hall of Fame. Those three and many more to come owe a great deal of gratitude to the suffering and courage that Jack Roosevelt Jackie Robinson underwent sixty-six years ago. Most don’t realize it, but Jackie’s #42 was the first uniform number to be universally retired throughout  all of Major League Baseball—this had never been done before.

Jackie Robinson was a great athlete and a great man. I saw Jackie play! I, for one, think he is due more!

Posted by John Howard at 9:57 AM No comments:

A Few Topics Off the Top of My Head – Guns, North Korea & Welfare Payments


I’m kinda fed up with a few of the hot topics being bantered around in the news these days. So I wanta get a few things off my chest.

Let’s start with the Gun Control hot topic. I am thoroughly fed up with the GUILT TRIP the President and the media is trying to lay on us. I feel very sad about the loss of life that took place in each of these events. But, having stated that, I do not feel an ounce of guilt over there events. We are experiencing an inordinate amount of throat shoving by both the President and the news media. I don’t like it a bit.

My feeling toward this matter is: “one of the big reasons for the split in Red/Blue America is due to the pushing back and forth by the patricians playing their game of politics. I am not a member of the NRA and see zero need to become one. This organization has only the power that we the public grant them. I liked what one of the two Senators said about pushing the compromise bill through: (my summation) He couldn’t get behind what was happening and didn’t want to get caught up in legislation he couldn’t support. His answer was to get behind legislation he could support. I hope we get somewhere that we all can live with.

Then there’s that little snot from North Korea! What is gonna happen here is anybody’s guess. If he intends to excite a war, he just might do so. I don’t believe, at this point, that the US has anything to worry about. We do have troops that are in harm’s way should he decide to cross the 38th. Make no mistake, this will get bad if that happens. Right where China stands on this matter is the larger question that only China can answer. The US can handle the little snot and his military very well, but early on, there will be a huge price to pay. Does anyone believe the people of North Korea are behind this guy?

Here in Texas, we once again, have the legislation pushing forward wit a bill that will require all (or most, I’m not real sure at this point) welfare recipients to go pee in a cup—drug testing. There hasn’t been any validation of a need for this action. Here, again, we have some patrician legislators pushing an agenda where there just might not be a problem. Somebody will have to pay for all this getting there, peeing, getting back from there  and the testing—you can darn well bet, it’s gonna be you and me. I’m not real sure how they are proposing the work-around to get needed funds to the children of the failure group—they say they have a way. But, doesn’t it sound like an increase in government (both people and funds) for a problem that may not even exist?
Posted by John Howard at 5:09 PM No comments: