The next day we departed Zermatt for Luzern. We casually walked over to the train station in Zermatt and loaded onto the Glacier Express—billed as the “the fastest slow train” in the world. Patsy and I were fortunate enough to score a “facing forward” pair of seats and had a great view of the attractions ahead of us. This fact, of course, is countered by the fact that our partners in the seats across from us were alerted to a fabulous sight in time to, just maybe, get a much better view than we had—but not always.

Across the way from us were Jim (Class of ’77) and Leslie Clemments—a fantastic couple, just as nice as anyone you would ever want to travel with and from Big Springs. To make the situation even better, across the aisle from us were Jerry and Ginger Leininger—from yesterday’s adventure in Riffleberg—and Lee and Joanne  Billingsley (both Class of ’75), another just as fun and enjoyable couple from San Antonio. After all, we were in for a three hour ride, you might as well be with people you get along famously with than not.

During our ride we saw some fascinating scenery and the wonderful country side of the valleys centering the Swiss Alps and their mountain sides. The farms and agriculture would seem very strange to the average Texas farmer, just as much as the Texas methods would to the average Swiss farmer. The prime difference being the ability and affordability of transportation to move product and livestock around and to market.

We soon arrived at the Andermatt train station and loaded busses to take us to lunch. The small village of Andermatt seemed very nice, but we had little time to take it in. We were quickly ushered into a nice looking restaurant and were prepared for a lunch featuring Fondue. This turned out to be our biggest disappointment on the entire trip. The European “lack of air conditioning” was quickly identified as the culprit and the added heat and fumes given off by the sterno heating the Fondue cheese just added to the misery. While I am sure that everybody may not have fostered the same opinion as I did, I am just as sure that those that shared my opinion were far from the minority—it was hot in there and all we received for lunch was bread and a hand full of extremely small white potatoes. Give me a pass on the next Fondue outing.

The only redeemable feature of the Andermatt experience is that we were joined by our new local guide Rosemarie. She was very knowledgeable and told some very quaint and funny stories mixed in with her regular banter about what we were experiencing. During our hour and a half bus ride to Luzern, we did suffer some slight indignity when our bus driver “ran” a red light and caused a mountain side traffic jam causing us to be ushered to the next turn off to await the local Swiss Police. He pleaded his case outside the bus and the police argued their side and eventually we all went our separate ways.

Finally we roll into Luzern and the driver makes his way to the Lion of Lucerne—a sculpture hewn by Lukas Ahorn from a design by Bertel Thorvaldsen in 1820 - 1821. The sculpture commemorates the Swiss Guards that were slaughtered in 1792 during the French Revolution upon the storming of the Tuileries Palace in Paris. When Mark Twain (Samuel Clemens) visited the area in the late 1870s, he remarked of the wounded lion “The shape is right, the attitude is right, the proportions are right, but that indescribable something which makes the Lion of Lucerne the most mournful and moving piece of stone in the world, is wanting.” (“A Tramp Abroad”, Chapter XXVI: The Nest of the Cuckoo-Clock, 1880) 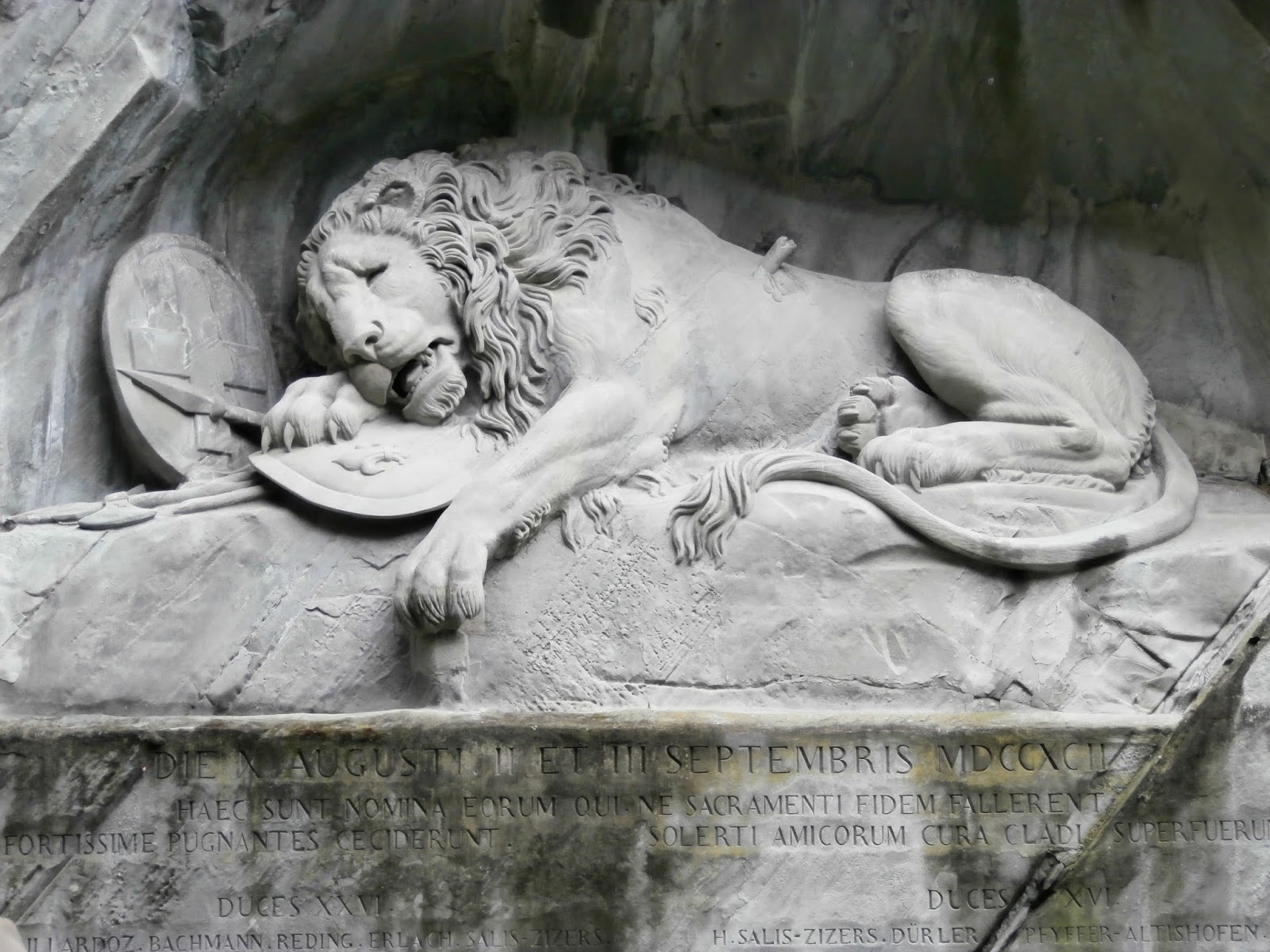 Before long, we have been delivered and checked into our room at the Grand Hotel Schweizerhof—a pretty swanky room if I say so myself. We have real difficulty figuring out how to work the lights so they will stay on. Patsy breaks down and calls the front desk and we get the goods on the lighting system. We quickly unpack and hit the streets for an early dinner. 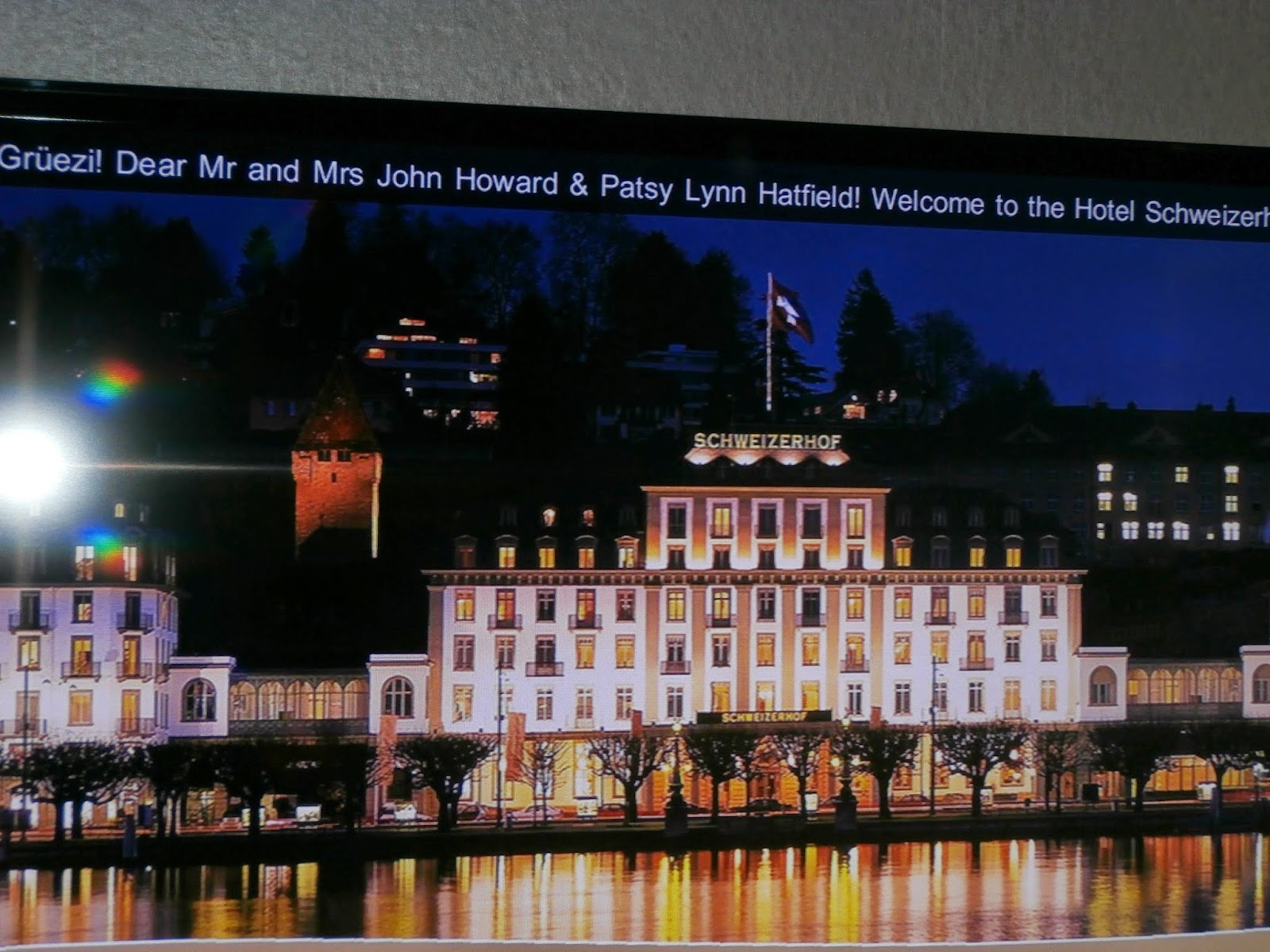 We walk over half of this side of Luzern and finally end up at a place close to the Lucerne Lion that we had visited earlier. I was after some of that “rosti” that Rosemarie had told us about. I had the Bratwurst Mit Rosti (Sausage Rosti) and Patsy had the Ham, Cheese & Bacon Rosti. Rosti as it turns out is hardly anything more than supped up hash browns. Jast as good as the meal was my serving of a local beer: Bier Eichhof Lager from Heineken Switzerland Maskenschnitzen. We were waited on a delightful waiter Hanns (the only guy other than the cook) operating the establishment. He said he was local, only rom a little berg just outside of Luzern. 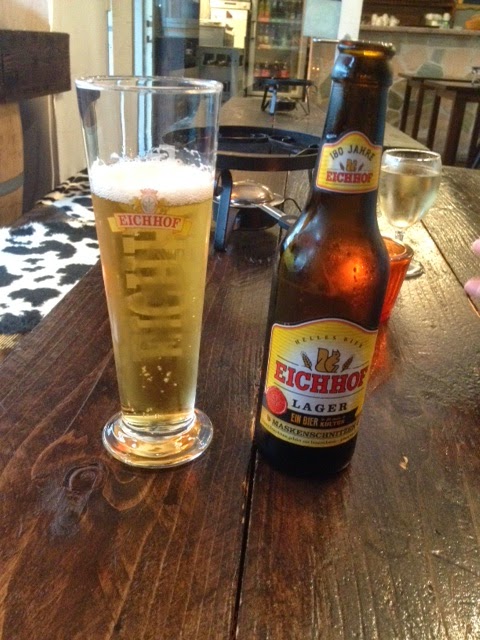 We took the chance to walk off our dinner and headed back to the promenade across the street from the Schweizerhof and running along the water front. We ran into Lee and Joanne as we strolled the promenade at which time Lee challenged me to solve the 5th of five science tests further up in a park along the water front. Finally arriving there, Patsy and I were quickly joined by Kevin (Class of ‘80) and Becky Raabe (Class of ‘84) of Floresville, Texas. 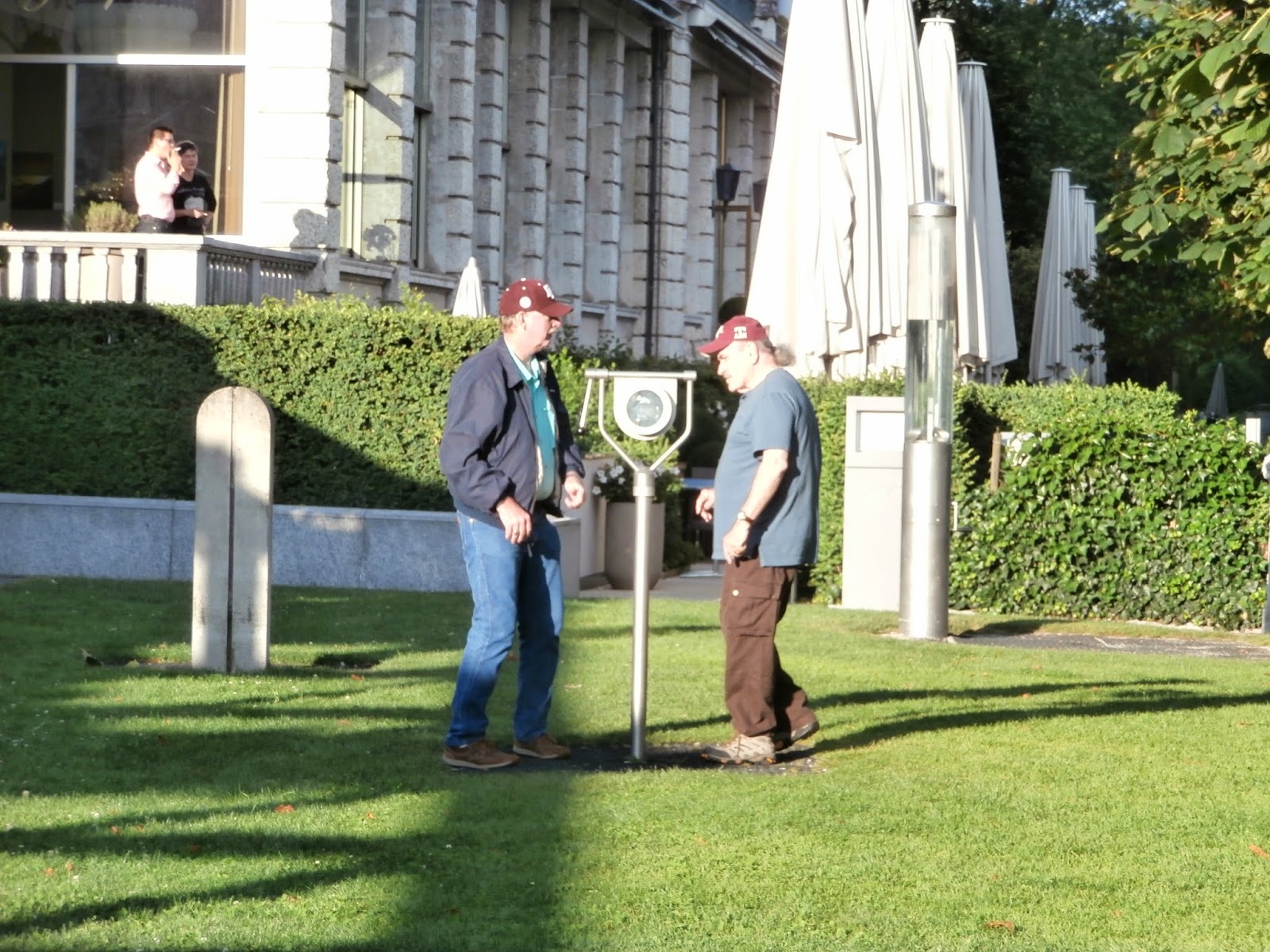 Through a flash of pure luck, Kevin and I stumbled upon the answer to the challenge that Lee could not. I just happened to be leaning over the four foot object sliced into four even cubes from the solid base just as Kevin happened to tap it. The sound gave the structure away as a tuning fork. Of course, we took great pride and boasted at bit more than normal as to our scientific ability to have accomplished this resounding feat.

Early the next morning, the entire group was off on a walking tour of Old Town to identify the local points of interest. The area was fascinating. As we strolled the area, we kept a watchful eye out for our next dining establishment for our evening fare.

We walked across the 14th Century wooden Chapel Bridge spanning the Reuss River—the only flood control (and empting point) of Lake Luzern. By mid-morning we had departed on our excursion to the top of Mount Pilatus (named for Pontus Pilot). We initially loaded into four person gondolas and about a third of the way up, we transferred to forty person gondolas—a real jolt when the gondola passed the support tower and we began to rock back and forth; a real pants loading experience. 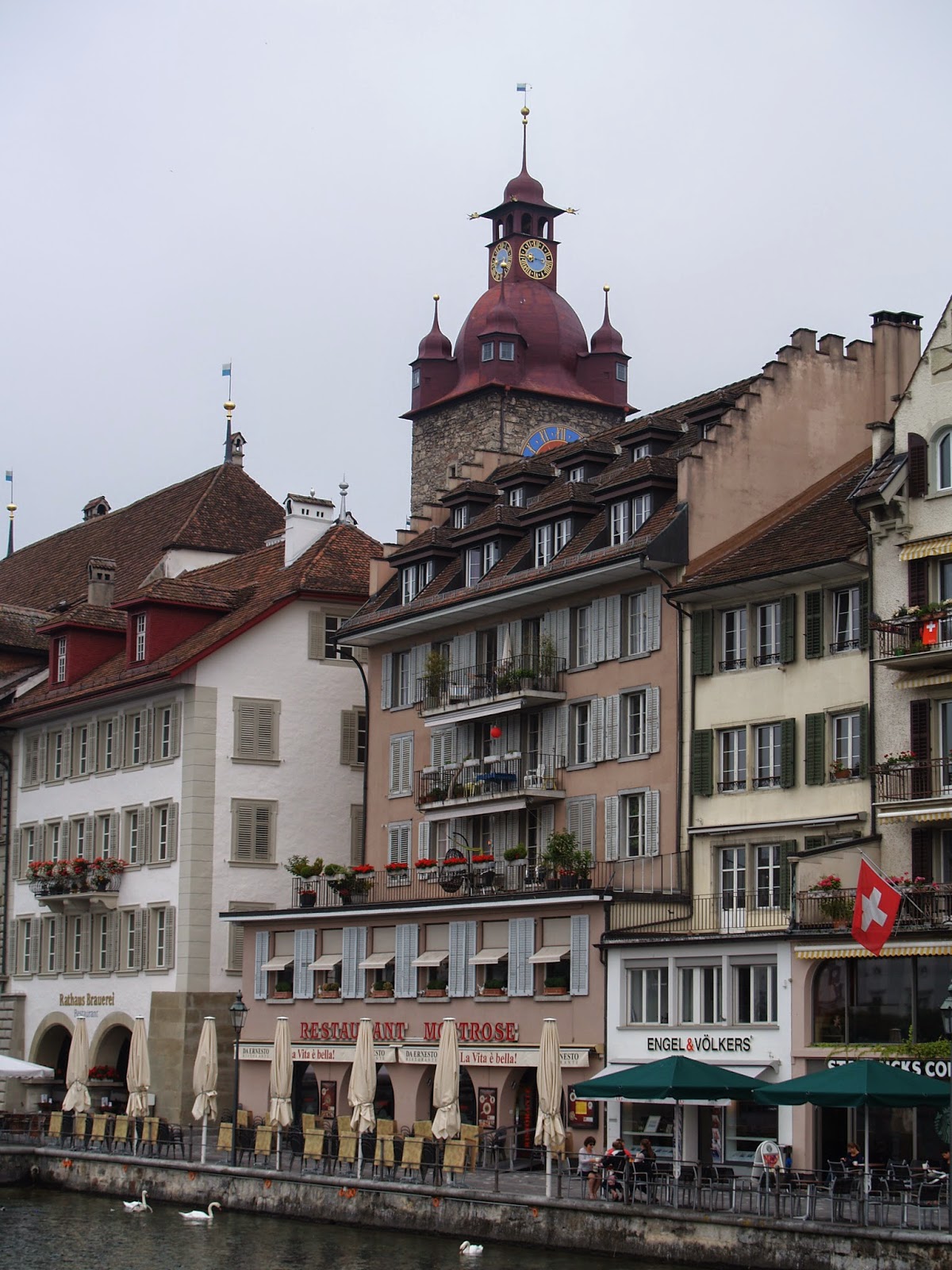 Water front of the Reuss River 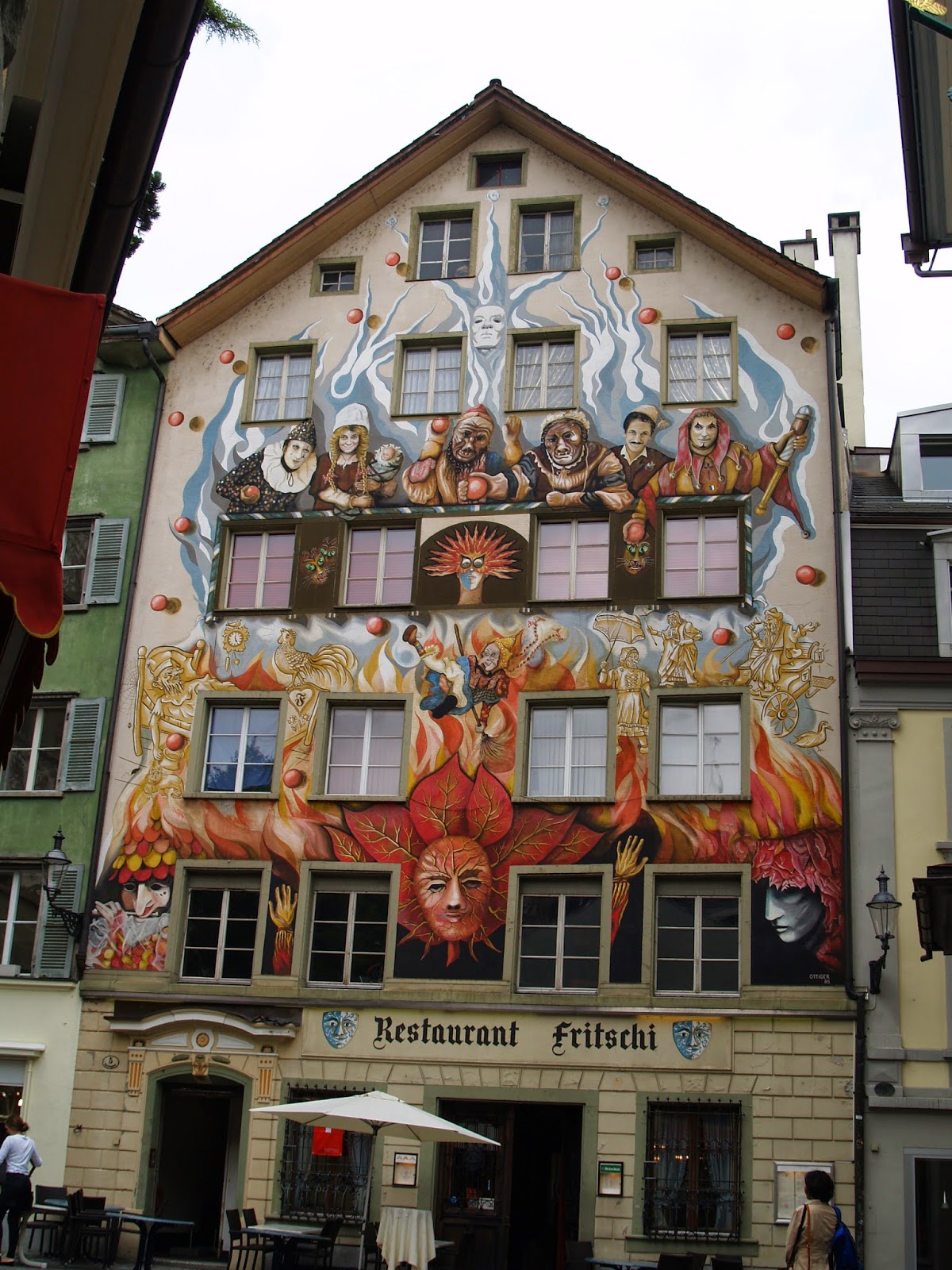 Great characters on the building in Luzern

First item on the tour at the top was lunch in the Queen Victoria Dining Room of the Klum Hotel on the mountain top. Great meal with Walt and Susie Laessig of Kensington, Maryland and family members touring with Jim Johnson and Katie Lamme of the University of Illinois. The lunch was really grand but took far too long and really hindered our time to explore on the top. The vistas from the 7000 foot summit were really great as you could see 360⁰. 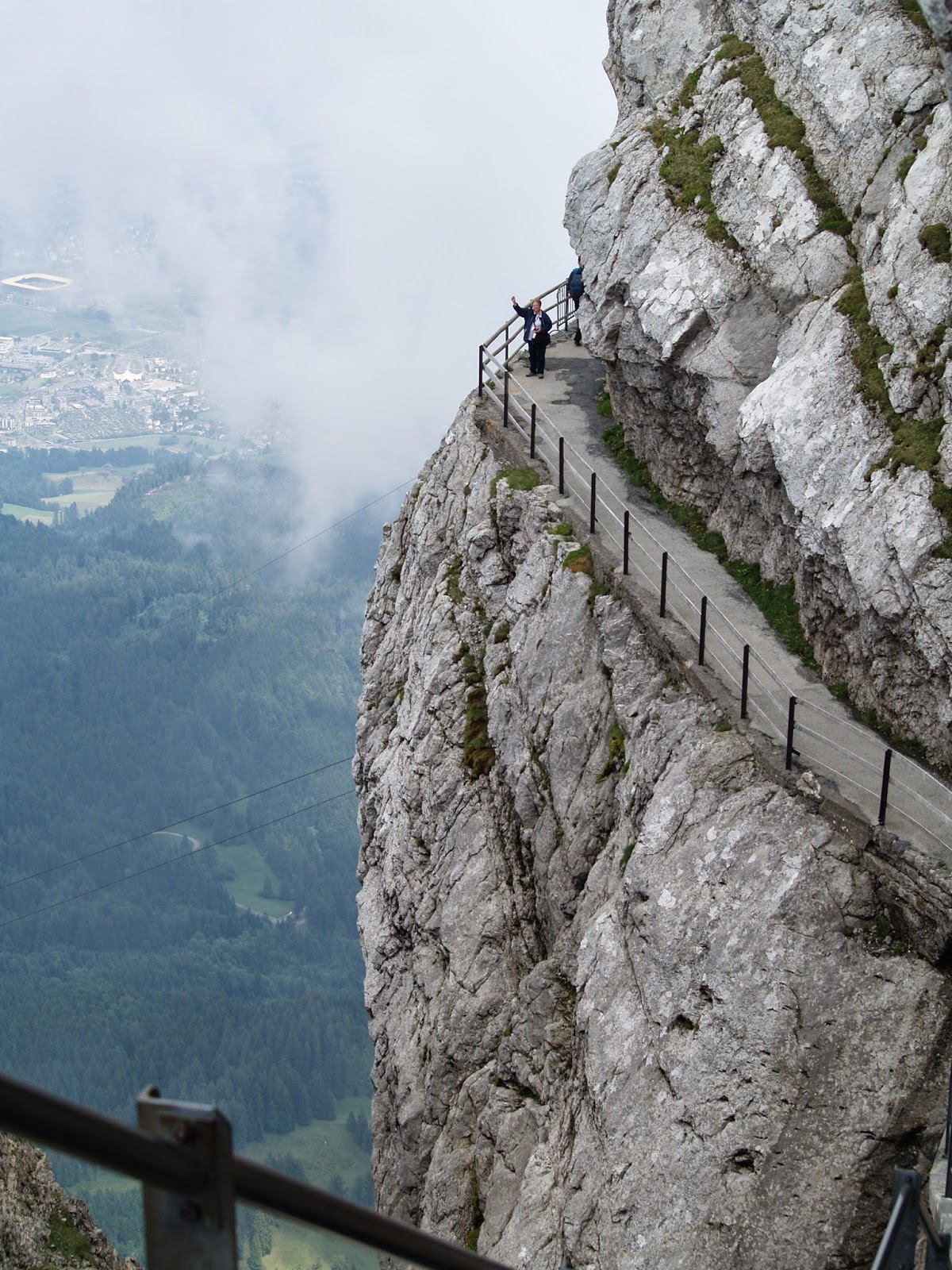 Patsy on the edge of Mount Pilatus

To get back down, we were loaded into the Pilatus Railway, supposedly the world’s steepest cogwheel railway, which allowed us to descend 5300 feet in less than three miles of travel. We were lucky enough to spot some chamois sheep (a goat-antelope species) on the mountainside as we descended. 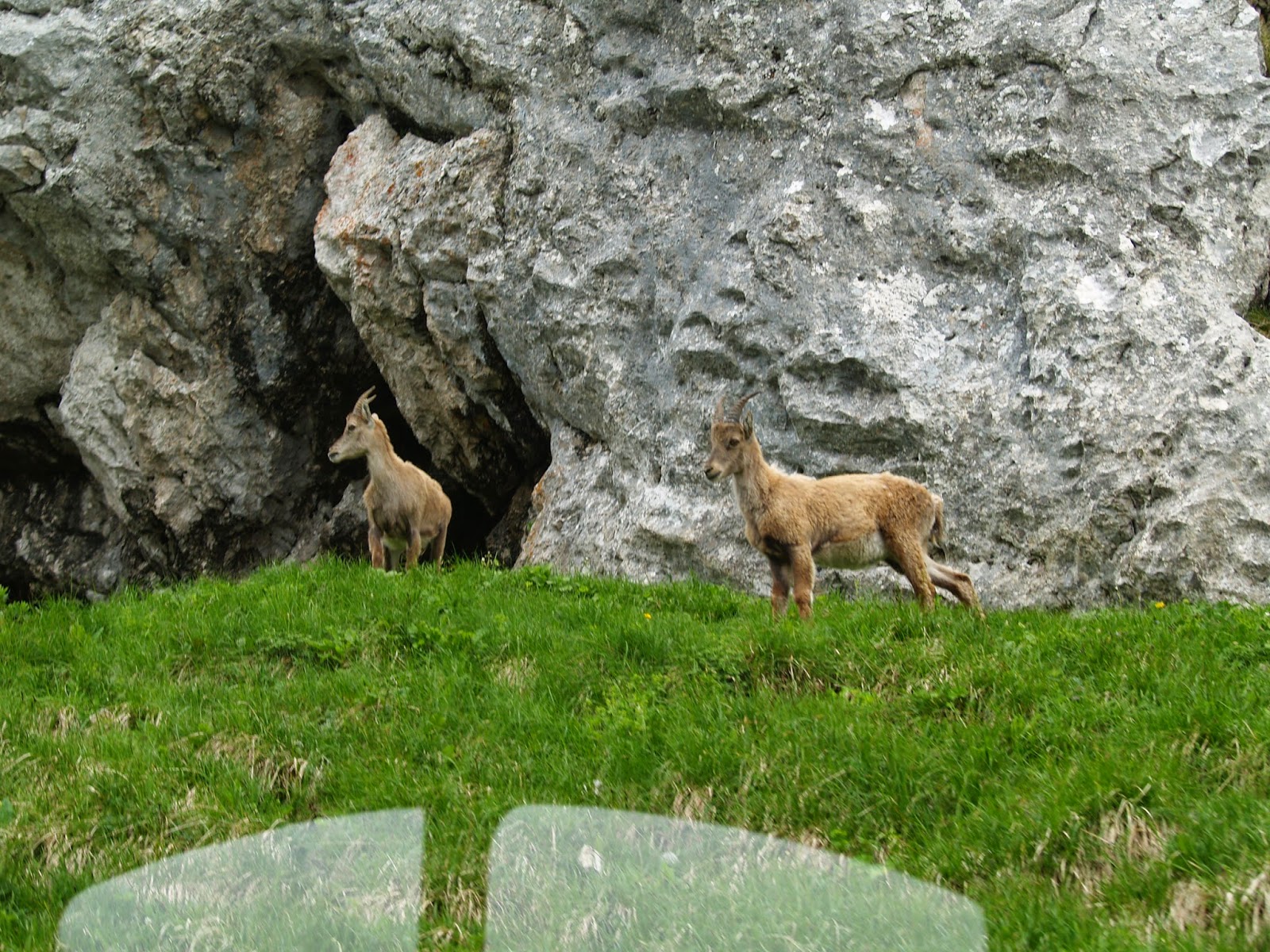 Once at the railway bottom, we crossed under the highway to reach the Gotthard Cruiser that toured us around Lake Luzern prior to disembarking us back on the promenade across from the Hotel Schweizerhof. 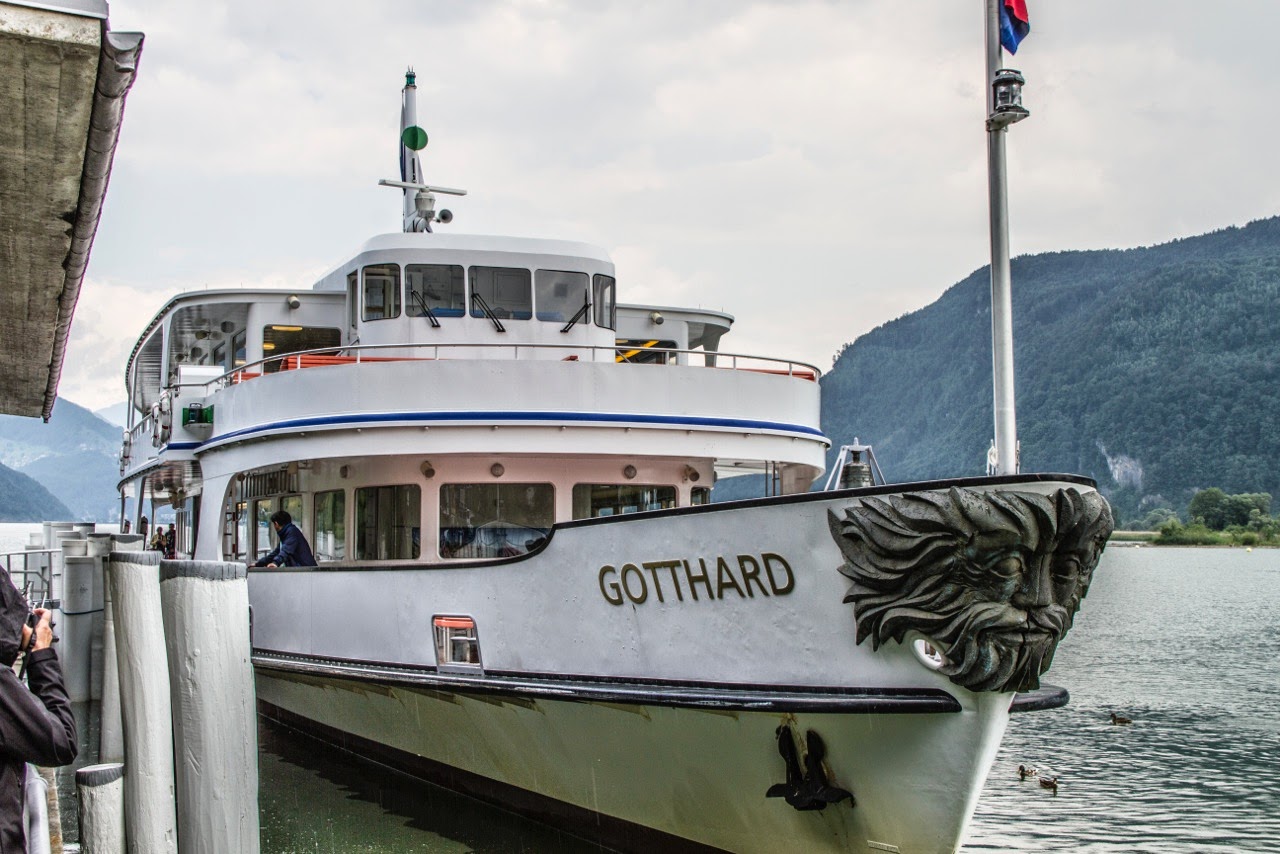 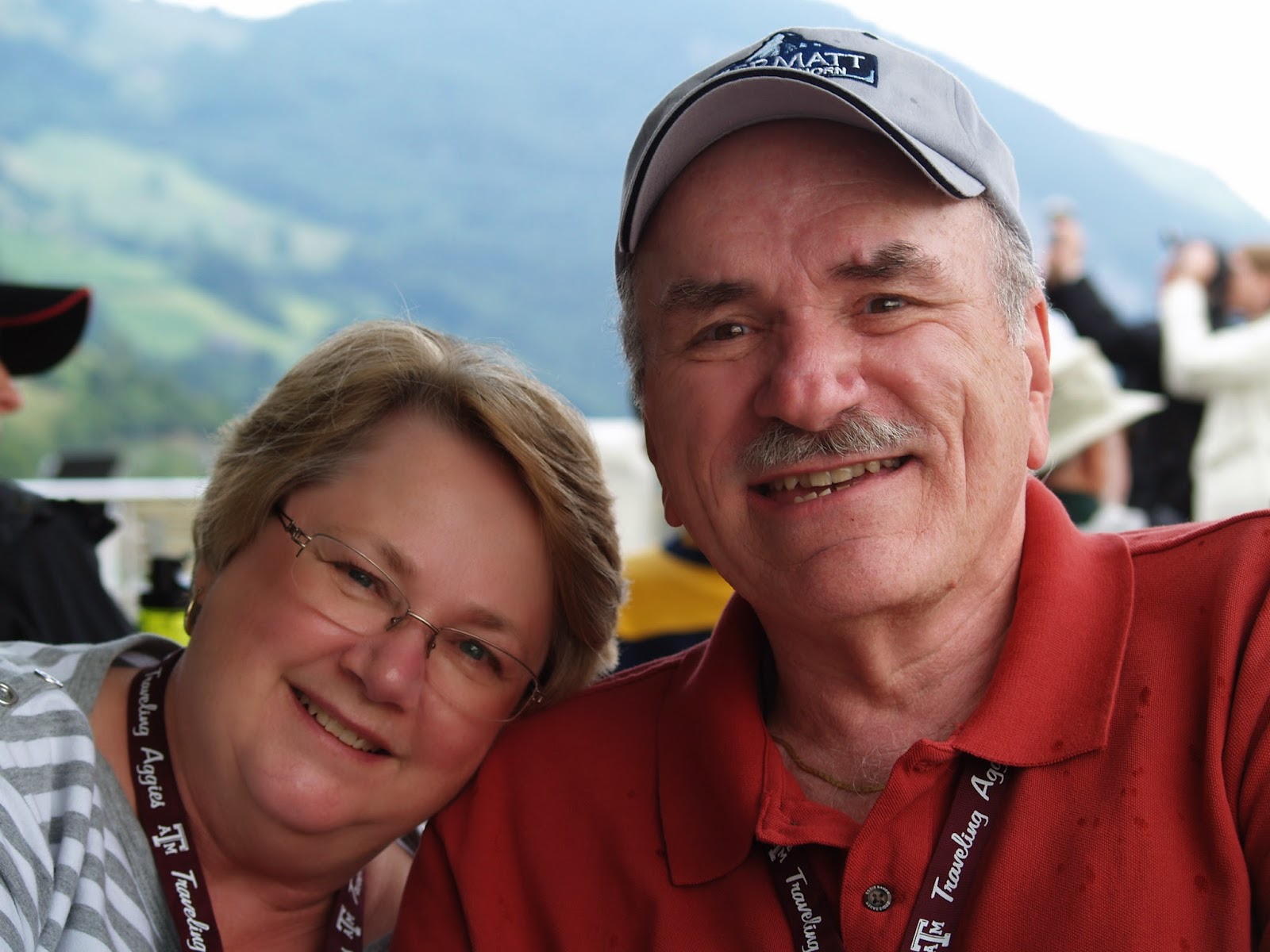 Patsy and I aboard the Gotthard

I am looking forward to finishing off our day in Luzern and heading to Interlaken, Bern and Basel.