Did I see you at the parade this morning? The parade was supposed to start at 0900 hrs, but it looked more like 0925 hrs before I saw movement down the route. No big-a-deal. What’s fifteen or twenty minutes when watching a parade is involved? So, we waited. Then it came. The turnout was pretty good for a Thursday morning. There seems to be more and more Latinos showing up on the sidewalks every year. I’m glad to see that. If you served, you served and need to be proud of that fact. Did I see you there?

It is sometimes just way too easy not to put forth the effort to do what’s right. Stay in bed, stay home and watch the tube. If you had to work or were on your deathbed (or standing at another’s); you get a pass. But if you didn’t have to work you shoulda been there or somewhere honoring a Vet. There’s just no excuse.

When I arrived, there was plenty of room for more to come; places right on the curb. Soon the festivities began. Bucky Godbolt of the Bucky and Bob Morning Show on KVET was our MC this morning.

Then came the bands. Not just one but many. 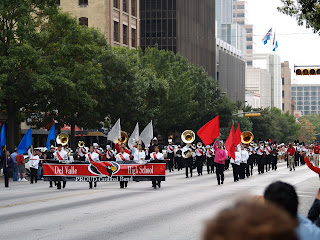 There’s always room for pretty girls and these are just an example of those that showed up. 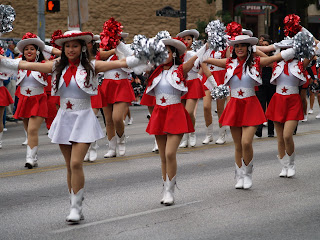 Three Navy WAVs are always there. I think they served in WWII. 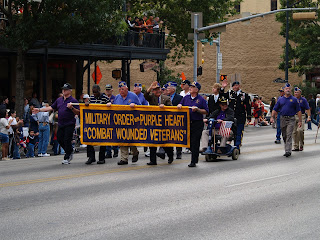 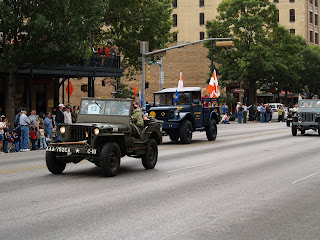 A new group, the Emergency Service Pipes and Drum Corps; They were really good.

A guy in a Texas Flag shirt singing the Ballad of the Green Berets was outstanding.

The Knights of Columbus representatives are getting up there in age; but still impress.

The Austin Retired Air Force Chiefs are always represented. That’s Dale Lyons, a friend of mine, driving the car. 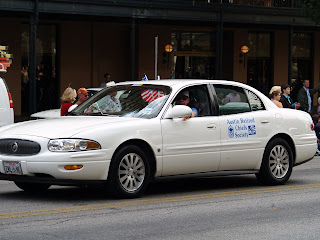 Of course there are always some REAL old soldiers from the Revolutionary War and the Confederate contingent always shows.

I had a good time. Wish I had seen you there.