The Iditarod Trip, the first couple of days


For those uninformed of you out there, I’m a BIG Iditarod Sled Dog Race fan (The Last Great Race). The XLVI Iditarod (44th) just finished, at least the first twenty six have completed the race in Nome, Alaska.

I had the great pleasure of supporting the first two Iditaords when I was stationed in the Army in Alaska back in 1973 & 1974. The first race had a big impact on the aircraft fuel supplies residing in the villages along the race course; a big impact at a critical time in their winter struggle particularly at the replacement cost.

To remedy the problem, the following year, Joe Reddington and his race committee ask the Army if we could support the air refuel requirements (particularly the news media) to lessen the requirements on the villages. Asking the Army at that time, meant asking me; more like assigning my Supply Platoon a mission. I had the primary responsibility for refueling the 172nd Infantry Brigade and the United States Army Alaska (USURAL) supporting units requiring fuel, both ground and aviation, at this time within Alaska. I got the opportunity to be introduced to Mr. Reddington and a planning meeting; the one and only time I met the guy responsible for the entire project; a man of real stature at the time but even larger now.

In 1974, my petroleum guys were out on the trail almost five days longer than the Mushers. They were socked in and the weather didn’t clear for some time after race completion.

I took a chance earlier in the year and signed up for a Traveling Aggie “Iditarod Race Start Tour” offered by Classic Escapes out of New York. I wasn’t disappointed.

The day after arriving in Anchorage and quartering at the Captain Cook Hotel in downtown Anchorage, my son Joseph and I plus a freshly met 3rd cousin, Sarah Brien—Aggie Class of 15—were on our way to a dog sledding activity scheduled to last 4 to 5 hours. Our original activity had been cancelled due to lack of snow in the Anchorage area, but there was plenty of snow in the Willow area.

The driver pulled over and let us get a shot of The Mountain (Denali; sometimes known as Mt. McKinley, but never to Alaskans) when we got into the Willow area. I could hardly believe it. This was the best shot I had ever taken of Denali. I was to get an even better one later in our trip, so I share that one later. 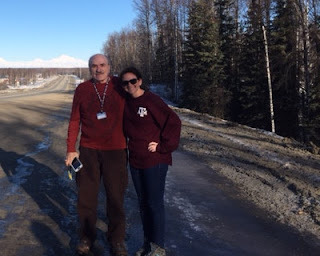 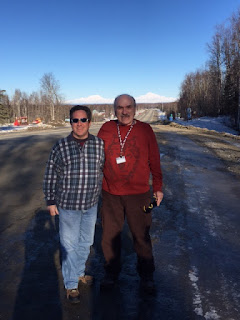 
Much to my surprise, we were headed to the dog yard of Dallas Seavey. WOW! Were we in luck? Could we have asked for a better situation? I think not!

While we didn’t get to meet Dallas personally this day, we were treated like royalty by Charlie, a nice young lady and professional dog trainer from England, and Jesse, one of Dallas’s dog handlers. Divided into two groups, we had first shot at the mushing run. 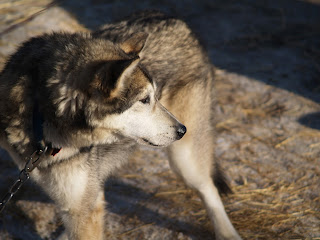 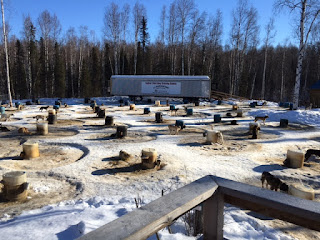 We walked down the hill to what is essentially a marshy lowland frozen and covered in snow, long lasting and packed snow. There, while my two compatriots hedged at who would be first on the whip sled, I stepped past them and jumped aboard. I received a quick briefing on the break and leaning into turns; I was ready. The other two, Sarah and Joseph, loaded onto the musher’s sled and Jesse climbed into the musher position. With a “Let’s go! Off we went. Man I caught on quick: even if I have to say so myself. I can do this. After traveling somewhere between 12 to 18 miles, we pulled over to gather ourselves and switch positions. I later learned the entire trip lasted only 6 miles, of which I controlled the whip sled for half the distance—I swear it was at least 12 miles. 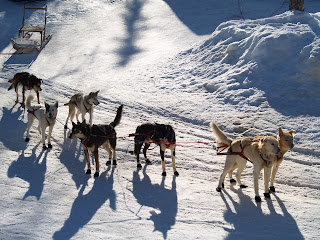 Our Team being prepared 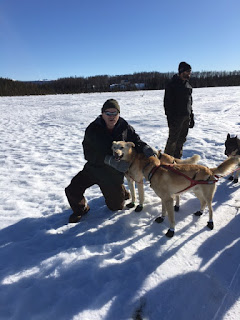 My Leaders at our stop to change Whip Sled Riders

After all three of us had our chance on the whip sled, we waited the next group to come down for their turn. Joseph and Sarah were talking with Jesse while I waited on the sled for the guys up the hill. Jesse had pointed the dogs toward the trail and had the claw break firmly planted in the snow/ice where we all were. That’s about the time that the team decided they weren’t waiting on anybody. The dogs swung toward the hill up to the dog yard and headed in that direction; swinging everything tied to them and bringing it with them in their new chosen direction. Joseph decided to get out of the way of the sled and ropes headed in his direction while Jesse and Sarah watched in aww. I, on the other hand, decided to hold on tight to my position on the sled which was now being jerked 180º in the opposite direction it had been pointed. While reversing its attitude, the sled decided that its upright stature was not the best for the adventure it was about to undertake—how that works, I’m not sure, but the decision was made and not by an animate object. Still holding on to the bar in front of me, I was soon listing to the side some 45º and before I could say: “Let me stand up and depart!” the sled listed to a 90º attitude. Not being satisfied with being completely on its side and being drug across the top of the ice and snow; the sled—greatly assisted by the sled dog team tied to the front of it—rolled over on top of me and continued its journey toward the hill, some thirty to forty yards off in the distance.

Jesse sprang into action—I might remind you at this time, my son is still running away from me and my crashing sled. Quickly, Jesse had the team stopped and under control. Joseph and Sarah came to my rescue—I assume—and soon Jesse also. I say assume because I was still under the sled with my face buried in the snow/ice mixture that made up my current world. Having only one good arm to work with, when Jesse offered me help from the left side, I was still unable to rise. Joseph helped me roll to my right and assisted me up—finally. I was a bit sore the next morning, but well OK to continue after my adventure.

We made our way up the hill to the dog yard and socialized with 90 of the best behaved pups one could ever ask to meet.

After our thrills in the dog yard and mushing, we took a lunch at the Sheep Creek Roadhouse just north of Willow. As is the custom when a group of people settle, everybody that had cell phones retrieved them and started to check what we check on our mobile socialization units. The guys with Sprint first reported that they had no service in this part of Alaska. They were quickly followed by the Verizon guys with a likewise report. Joseph’s and my AT&T cells connected right up and worked as they should right away.

After our late lunch, we were headed back to Anchorage and the Mushers banquet where the racers draw their starting positions for the Last Great Race.

I’ll get back to you with more details soon.